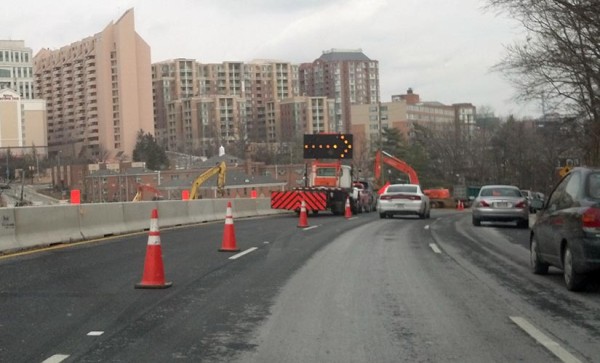 VDOT crews have started tearing down the bridge from Courthouse Road to eastbound Route 50, leading to numerous closures, detours and delays in the area.

Today through Sunday night, traffic on westbound Route 50 is being diverted onto 14th Street N., up to Wilson Boulevard, down Barton Street and back to Route 50 via 10th Street. This afternoon, a long line of traffic was observed before the detour, which is in place to allow for the two-day demolition of the bridge.

Through August, when construction of a new bridge is expected to be completed, eastbound Route 50 drivers heading to Courthouse will have to drive past Courthouse and take the Rhodes Street bridge to 14th Street.

Drivers in Courthouse seeking to get on to eastbound Route 50, who used to be able to use the Courthouse Road bridge, will now have to take the Rhodes Street bridge to the Arlington Boulevard service road that leads to the difficult blind merge with Route 50 near the U.S. Marine Corps (Iwo Jima) memorial. Temporary traffic lights have reportedly been placed at the Arlington Boulevard/N. Meade Street intersection, before the entrance ramp, to help with traffic flow.

The bridge demolition is part of the $39 million Route 50/Courthouse Road interchange project. The project is scheduled for completion in October.