A developer is having preliminary discussions with Arlington County about replacing a strip of low-rise retail along Columbia Pike with a new apartment complex.

Located across from Penrose Square, the building would replace Rappahannock Coffee, L.A. Nails, the former Saah Furniture and other businesses in three low-rise retail buildings on the block. At minimum, the facades from two of the buildings (2338-2344 Columbia Pike and 2406-2408 Columbia Pike) will be preserved and incorporated into the new building. 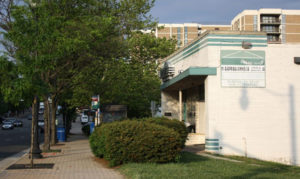 Columbia Pike’s Form Based Code allows for apartment buildings up to 6 stories, so County Board approval may not be needed in order for the project to proceed, but the relatively historic nature of the buildings on the block will likely require additional community review, public hearings and a Form Based Code amendment.

So far, the developer has not submitted a formal Form Based Code application to the county, so a county spokeswoman was not able to speculate on a timeframe for the development.