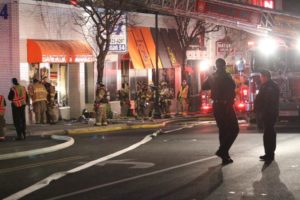 Bangkok 54 restaurant (2919 Columbia Pike) was open for lunch and is now open for dinner today (Thursday) as usual, despite a fire that ripped through the business’ next-door market early this morning.

We’re told the Thai restaurant only suffered minor smoke damage as a result of the fire, which caused significant damage to the market. The heaviest damage was in the ceiling of the market, according to Arlington County Fire Department spokesman Capt. Bill Shelton.

Fire investigators are still on the scene, trying to determine the cause of the fire. So far, there’s no estimate of the cost of the damage.