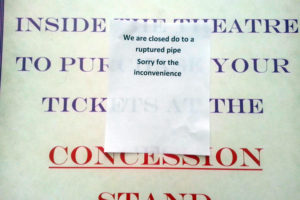 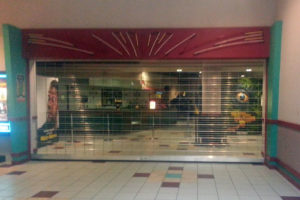 Update at 8:45 p.m. — First Down Sports Bar and Grill had to shut down tonight, also due to a burst water pipe. From the businesses’ Facebook page: “We have had to close down suddenly for tonight because of a water pipe burst. Hopefully, we’ll be back up and running tomorrow. We will have an update on here as soon as we figure it out. Sorry for any inconvenience this may have caused.”

(Updated at 11:40 p.m.) The Regal Ballston Common 12 theater was closed tonight due to flooding from ruptured water pipes.

Three pipes burst this afternoon, sending water spilling across several floors of the theater, we’re told. A clean-up is underway and the theater is hoping to reopen tomorrow (Thursday).

The water also impacted elevators in the mall building.

“Please be advised this afternoon, the sprinkler pipe broke in the Ballston Mall movie theatre and water is going into the freight elevator,” said a memo sent to workers in the offices above the mall. “As of right now, all elevators are out of service.”

Burst water pipes have plagued homes and businesses across Arlington this week, as temperatures dipped into the teens and single digits. The Trader Joe’s store in Clarendon reopened this morning after a burst water pipe last night. Also last night, the Doorways Family Home in North Arlington, which houses homeless families and victims of domestic violence, was closed when “a sprinkler head in a second floor ceiling burst due to freezing conditions” and flooded the floors down to the basement.

The women and children who were in the home were evacuated to hotels. Restoration crews worked today to make the house habitable again.