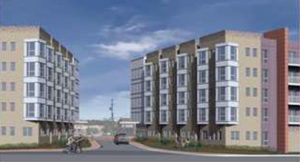 Members of the Arlington Ridge Civic Association will meet with affordable housing developer AHC tonight to discuss their concerns about plans to replace the Berkeley apartment complex.

The Berkeley, at 2910 S. Glebe Road, currently consists of 137 apartments, 110 of which are committed affordable units. AHC plans to replace the aging four-story complex with two new five-story-apartment buildings, consisting of 287 units, including 171 affordable units, and 264 parking spaces.

In its newsletter, ARCA says it is “concerned” about the project’s density and height. Among the listed concerns:

“It violates the existing RA8-18 zoning, which allows 4 stories. RA8-18 zoning says the housing should look like townhouses or garden apartments; 5 stories does neither. For comparison, the adjacent townhouses at Arlington Ridge Rd. & Glebe Rd are zoned RA8-18.”

“It is not consistent with the ‘4 Mile Run Master Plan’ which provides guidance for the area which is in the Chesapeake Bay protection area and is supposed to comply with the Arlington’s Chesapeake Bay Protection Ordinance.”

“So far the staff information omits any reference to ARCA’s recently accepted Neighborhood Conservation Plan which specifically objects to up-zonings in our area until a comprehensive master plan has been developed. Our plan calls for preserving, protecting, enhancing and stabilizing the edges of our community. This proposal does not accomplish that goal.”

“While affordable housing may be a laudable goal, coming at the expense of these concerns is problematic,” the newsletter concluded.

Arthur Fox, ARCA’s Vice President of External Affairs, says the proposal is at an “early stage” and declined to say whether the organization would ultimately oppose it when it reaches the Arlington County Board. ARCA will meet with AHC representatives and county planning staff at its membership meeting tonight.

ARCA previously opposed the PenPlace development and has expressed concerns about a proposed apartment complex, both in Pentagon City. Like those projects, the Berkley is outside ARCA’s boundaries. However, the neighborhood includes Arlington Ridge Road, which is often jammed with commuters around rush hours and thus impacted to a degree by surrounding developments.