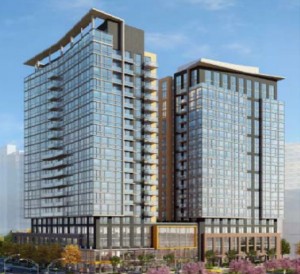 A vacant office building in Pentagon City could be in line for a transformation into a two-tower high-rise apartment building.

The former Department of Defense Inspector General office at 400 Army Navy Drive has submitted a site plan for a 20-story building with two towers — on one, three-story platform — that would have 491,588 square feet of ground floor space and 453 residential units.

The building, also called the “Paperclip Building,” was acquired by Bethesda-based developer LCOR in 2012, according to City Biz List, with the plan to convert it into housing. The site plan is now under consideration with the Site Plan Review Committee (SPRC) and is slated to go before the Planning Commission and the Arlington County Board no earlier than April for approval, we’re told.

The 1.6-acre plot of land is bounded by Army Navy Drive to the north, 11th Street S. to the south, S. Eads Street to the west and the Doubletree hotel to the east. The site is across S. Eads Street from the recently-approved PenPlace commercial development, which calls for four office buildings and a 300-room hotel on 10.2 acres; more than 4 million square feet of floor space. 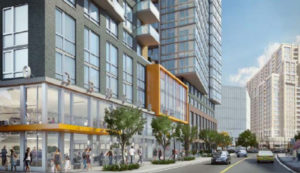 PenPlace was approved despite heavy opposition from the Arlington Ridge Civic Association (ARCA) and other neighborhood groups, who objected to the height of the buildings (16-21 stories) and the additional traffic expected to be generated.

At the initial SPRC meeting, commissioners expressed concern that the traffic study the developer performed in June, when putting together its site plan, did not include the impact from PenPlace. In addition, a proposed operations and maintenance facility for the Crystal City streetcar line is directly adjacent to the planned apartment site.

“I don’t see how the proposed 400 Army Navy Drive project can be successfully developed if the County proceeds with its plan to build a streetcar operations and maintenance facility a few feet from its front door on the ‘tear drop’ in the middle of Eads Street,” Arthur Fox, who’s representing ARCA on the SPRC for the project, told ARLnow.com.

“Indeed, an O&M facility in that location will likely be the rotten apple that will spoil the barrel the County is seeking to develop across Eads on PenPlace,” Fox continued. “Unfortunately, the county failed to seriously consider a number of alternative sites that would be far better suited for an O&M facility. It needs to take a step backward and reopen that process.”

END_OF_DOCUMENT_TOKEN_TO_BE_REPLACED

More Stories
Ask Me (Almost) Anything: Tax Tips for Early BirdsNOVA Legal Beat: Lying to Get Into the Military?