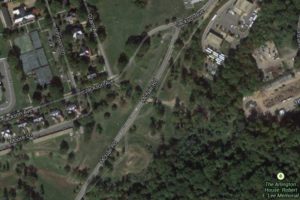 The jogging trail along McNair Road in Ft. Myer has closed for good.

Officials at Joint Base Ft. Myer-Henderson Hall announced last week that yesterday, Monday, the trail, which runs from the Old Post Chapel to McNair Road’s intersection with Marshall Drive, would be closed.

The trail is closing to accommodate the expansion of Arlington National Cemetery with its “Millennium Project.” Besides the closure of the trail, more than 700 trees are set to be removed for the cemetery expansion, a plan that rankled local activists when the expansion was discussed in March.

The $82 million expansion is expected to add in-ground and above ground burial locations, columbarium space, committal shelters and infrastructure to support it. It will take over a parcel of undeveloped land next to Ft. Myer. The expansion is needed, according to cemetery officials, because the cemetery could run out of burial space within 12 years.

A new jogging path to replace the closed one is expected to be constructed after the project’s completion in spring 2016.