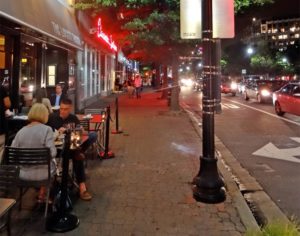 The Arlington retail market is well-positioned for the next decade or so, say several retail and real estate experts.

Those in and around the retail industry say the recent trends toward mixed-use, urbanized development and the growth of “milennials” among consumers in the post-recession years add up nicely for Arlington.

Bruce Leonard, a managing principal at Streetsense, a real estate, retail and marketing firm, gave a lecture at George Mason University’s Arlington campus last month called “the changing face of retail.” He contended that the retail market is catching up to the real estate market in seeking urban, walkable centers.

Downtown areas were the dominant retail markets at the turn of the century, he said, until “construction of the interstates it moved away from the cities.”

“Now, ironically, we’re coming back to more urban- and downtown-focused retail,” Leonard said. “So for the [Rosslyn-Ballston] corridor, that’s really a good thing because it’s really urban. It’s relevant to the consumer in that it has the ability to provide an immersive and engaging environment… which is what [the consumers] are looking for.”

Kevin Shooshan, who oversees the leasing for The Shooshan Company in Ballston, said that’s why Arlington will still have an advantage over Tysons Corner when the Silver Line opens.

“I think specifically in the Courthouse-Clarendon-Ballston area, it’s more that it’s a walkable area, even more than Tysons,” he told ARLnow.com yesterday. “In Ballston, in Courthouse, in Clarendon, you can go on a leisurely four-block, five-block walk, passing ground floor retail with every step, with options to grab a paper, grab coffee, meeting with someone. It’s not just a walk down a Metro access corridor. I do see that as a huge asset.”

As the D.C. area apartment rental market continues to surge, that retail market can be key for attracting tenants. Most of the new buildings have fitness centers, pools, computer lounges and other amenities, but the shops in the neighborhood are every bit as much of the pitch to a tenant these days.

“Retail, in these markets, is really becoming an amenity,” Leonard said. “We’re seeing the conversation is ‘what kind of retail will I get that will match the demands of my tenant?’ Co-tenancy is going both horizontal and vertical, and that’s a really new trend.”

“In a 10-minute conversation, it’s mentioned in the first minute or two by the client before we have to bring it up,” Buck said. “It’s not something you have to sell. The client or the purchaser or the tenant, they get to us because they’ve already realized that all those things are super important to their use.”

Lastly, the top trend Leonard said the retail market will see, both locally and nationall, is continued downsizing of big retailers. With online shopping and a shift in consumer behavior, chains that had giant, big box stores are looking for spaces sometimes half the size as before.

Most national retailers have square-footage requirements for any space they are looking for, Buck said, but that never prevents them from squeezing themselves in Arlington.

“These retailers are smart enough to realize that it may not fit their corporate mold, they know better than to skip Arlington,” he said. “You’re not going to just pass on Arlington in general, it’s just a bad business decision.”