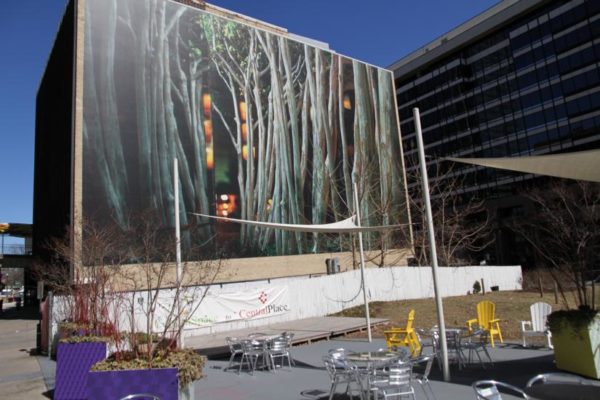 The Rosslyn Business Improvement District today officially unveiled a gigantic photographic mural that has been temporarily installed on the side of a building near the corner of Wilson Blvd and N. Lynn Street.

The 6,000 square foot photo is “the largest photographic print on the East Coast and bigger than the scoreboard at Nationals Park,” according to the BID. It is a “tranquil depiction of crape myrtle trees that [photographer Frank Hallam] Day snapped during a month-long photographic study of Rosslyn.”

The BID would not reveal where the photo was taken — it will instead be running a social media contest for people to guess where it was taken.

The photo is expected to remain on the side of the office building at 1730 N. Lynn Street for at least a year, until the building is demolished for the planned Central Place office skyscraper.

“[This] is the third project installed by the Rosslyn Business Improvement District as part of its award-winning temporary public art program launched last spring,” the BID said in a press release. “The program aims to help resolve urban design issues and soften Rosslyn’s hard edges as many parts of the district undergo redevelopment.”

Hallam Day told ARLnow.com that in order to achieve the resolution needed for the massive photo print, the image is actually composed of several dozen individual photos stitched together. The final ultra-high-resolution image took up about 45 gigabytes of space on his hard drive, the BID said.