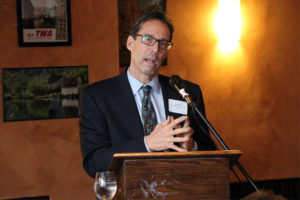 (Updated at 11:30 a.m.) Arlington County Board Chair Jay Fisette used the podium at a Columbia Pike business luncheon yesterday to respond to critics of the Columbia Pike streetcar and the county’s recently completed return on investment study for Pike transit.

The study, conducted by an independent consultant and funded by the county, suggested that the Columbia Pike streetcar would generate about $3 billion more for the corridor’s economy than enhanced bus service. Critics of the streetcar say a Bus Rapid Transit system would be a preferred, cheaper alternative, but Fisette reiterated yesterday that BRT is not an option for the Pike.

Streetcar opponents have asked why the county spent money on a return on investment study when a similar study was conducted last year, but Fisette said this study accounted for the Columbia Pike Neighborhoods Area Plan and compared streetcar to enhanced bus service, two components the previous study did not include.

“Sure, attack the messenger, pick [the study apart],” Fisette said, “but use the facts please.” 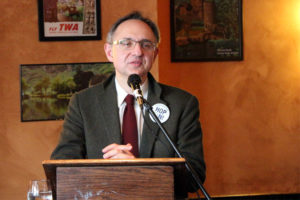 Fisette described the community process used to develop the plan for the streetcar, and said the county projects that, in the not-too-distant future, 65 percent of Arlington’s population growth and 44 percent of its job growth will be concentrated along the streetcar lines on Columbia Pike and in the Route 1 corridor from Pentagon City to Crystal City and Potomac Yard.

Takis Karantonis, the executive director of CPRO and one of the streetcar’s biggest advocates, gave a brief talk to the dozens of business and community leaders in attendance while wearing a pin on his lapel for Streetcar Now. He said a $310 million investment by the county in streetcar is a fair number compared to the money the private sector has invested in the Pike.

“Each of these new buildings cost around $90 to $100 million,” Karantonis said. “Each one. Private money is holding up its end of the deal.”