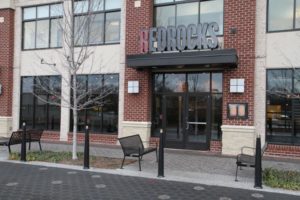 Lower prices, more burgers, a new delivery service and parking validation. Those are among a series of recent changes made by RedRocks, the pizza-centric restaurant on Columbia Pike, to help boost business.

The restaurant, located in the Penrose Square shopping center at 2501 Columbia Pike, is “relaunching” after a year in business due to lower-than-expected sales, according to co-owner Doug Baj.

“It’s been a little bit challenging, the whole Columbia Pike corridor,” Baj said. “I’m probably not the only business owner to voice that.”

Before its February 2013 opening, RedRocks’ owners thought the Pike would be similar to Columbia Heights in D.C., their first location, which had been a smash hit thanks to strong neighborhood support. They have since come to a realization that the Pike is a significantly different market.

“We saw a lot of similarities,” Baj said, citing young families he’s talked to who have moved from Columbia Heights to the Pike. “What’s lagging a bit is a bit of the sense of community in the Penrose neighborhood so far. It’s getting there, but you still see a lot of people on weekends going up to Clarendon, going in to the city, instead of staying here. We’re trying to make it more enticing for people to stay home and not go to the District” or the R-B corridor. 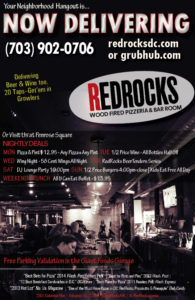 Among the enticements being rolled out are a revamped menu, which subtracted small plates and added burgers and other pub fare “that we wouldn’t [serve] at our other location.” Two weeks ago RedRocks added a delivery service that serves a two-mile radius around the restaurant. And RedRocks will have an expanded outdoor seating area when the weather finally warms up.

Many of the changes, however, are value-oriented. There are nightly food specials; a happy hour with $3 beers and half-priced appetizers; a $13.99 all-you-can-eat weekend brunch with 99-cent mimosa and bloody mary refills; a kids-eat-free deal on Sundays; and, starting next week, a pizza, pasta and salad lunch buffet that will run Tuesday through Friday.

“People tend to like value on the Pike, that’s what we’re finding overall,” Baj said.

RedRocks has given up on trying to convince Arlington County to offer free parking after 6:00 p.m. in the Penrose Square garage — instead it is now offering free parking validation.

The relaunch started rolling out in February, and Baj said the results so far are promising. “It’s good, very good, the neighborhood is responding,” he said.

In a phone interview with ARLnow.com, Baj was reluctant to wade into the “hot-button” issue of the planned Columbia Pike streetcar, but he did point out that his fourth RedRocks location, along D.C.’s soon-to-open streetcar line on H Street NE, is doing well. The area is getting a new Whole Foods — the streetcar helped to bring that and other “positive development” to the corridor, he said.

“I’d love to see that kind of excitement on Columbia Pike,” said Baj. It could potentially help other restaurant owners on the Pike, who are also dealing with lackluster sales.

“It’s been a struggle for many of them,” he said. “There are definitely some growing pains with the neighborhood, but I don’t think anybody’s going to bail on it. They’re going to stick it out, especially with new housing coming in.”