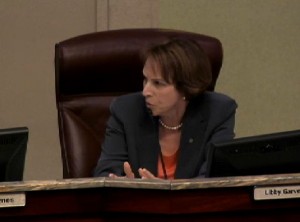 Arlington County Board member Libby Garvey, an outspoken opponent of the planned Columbia Pike streetcar system, called for a truce yesterday on the language surrounding the bus alternative.

Garvey made a presentation during yesterday’s County Board meeting, challenging the return on investment (ROI) study a consultant performed on contract with the county and presented last month.

Garvey said the study makes faulty comparisons, disputed the $3.1 billion ROI claim, said that calling the streetcar a “seamless ride” is nonsensical since a bus would do the same, and claimed it ignored contrary analysis, among other assertions.

After Garvey’s presentation, County Board Chair Jay Fisette challenged streetcar opponents’ claims that bus rapid transit (BRT) would be a preferable solution since dedicated bus lines, widely considered a requirement of a BRT system, are not possible on Columbia Pike. In response, Garvey offered an olive branch of sorts on the language the two sides of the streetcar debate uses.

“On BRT, I’ll make a deal with you,” Garvey said. “We don’t ever talk about BRT here again, we just say ‘streetcar-like bus.’ That’s all we need to say. A streetcar-like bus will do much better on Columbia Pike than a streetcar. Let’s just forget about it. It’s just a canard, it’s silly to talk the way we have on what’s BRT and what’s not. That just gets away [from the point], and I share your frustration.”

Fisette quickly agreed to Garvey’s terms, replying “all right, let’s call a truce on that one.”

The bus system that is feasible on the Pike was referred to by the ROI consultants as “enhanced bus service,” which wouldn’t use a dedicated lane but would have many features of a streetcar, like greater ridership capacity, a sleeker appearance and off-board fare collection.

Garvey’s challenge to the consultant has been echoed by other streetcar critics, who say the study was biased from the start, and its methodology — comparing two streetcar systems and two enhanced bus systems in cities around the country — was lacking. Fisette said the consultants, HR&A Advisors, will be making presentations to several county commissions, and backed them on their claims.

“I’m not saying [the study’s detractors] don’t have some good points or couldn’t use clarifications to better understand how the consultants went about their work,” he said, “but I take issue with discrediting the work of these consultants overall.”