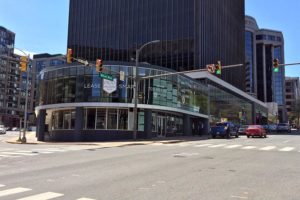 A Capriotti’s Sandwich Shop is coming to the ground floor of 1500 Wilson Blvd in Rosslyn.

The restaurant’s leasing agent made the announcement today that the lease for the space has been signed. Formerly home to Santa Fe Cafe, the office building and retail space at 1500 Wilson Blvd has since been renovated. We previously reported that Capriotti’s was looking to open in Rosslyn, but at the time a location had not been finalized yet.

Capriotti’s is a fast-casual sandwich shop with locations in more than a dozen states. It specializes in large sandwiches that feature turkey and roast beef that has been roasted in-house, overnight.

“Part of what drew us to Rosslyn is you don’t have a ton of sandwich shops here,” a company rep told us in October. “I think we’re going to be a spot where you can go in and pick something new every time and not be disappointed.”

No word yet on when Capriotti’s plans to open, but most restaurant build-outs in Arlington take at least a couple of months.