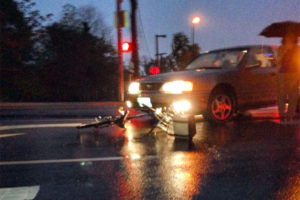 (Updated at 4:20 p.m.) Rosslyn’s “Intersection of Doom” lived up to its name for a local cyclist Monday night. She says she was hit by a car in the crosswalk and then ticketed while in her hospital room.

Lindsey Kelley was cycling home from work at 8:00 p.m. and said she entered the crosswalk at Lee Highway and N. Lynn Street on a “go” signal, when she was struck by a four-door sedan coming off I-66 and turning right toward the Key Bridge.

By her account, the collision was the driver’s fault.

At the Virginia Hospital Center, however, Kelley was visited by the responding U.S. Park Police officer and issued a ticket for “disregarding traffic signs or road markings,” which may cost her $70, not including U.S. District Court fees. According to the police report, obtained by ARLnow.com, the officer said Kelley was not in the crosswalk. Kelley said the picture she took at the scene (above) was taken without her moving the bike from where it came to rest after the crash.

Kelley was diagnosed with a sprained wrist, some sprained fingers and a mild concussion. She said the officer didn’t take her statement at the scene, and instead relied on the word of the driver and a witness who she said “berated” her as soon as she was struck.

“It was a guy in a Black SUV with Maryland plates,” Kelley told ARLnow.com. “He stopped and got out and basically was very rude and said ‘you don’t deserve to be riding your bike here.’ He gave [the police] a different story than what happened. I never spoke to the officer again until he issued me a citation at the hospital. He took my ID, but he never asked me what happened or where I was coming from.”

Kelley also said that since the lane she was crossing was a turning lane, the officer “told me I should have seen it coming.” He had already written the ticket by the time he entered her hospital room.

Kelley lives near the Park Georgetown apartments and said she had just biked across the Key Bridge and was getting on the Custis Trail, coming home from her job at a nonprofit in the District. She said she just started the job, and has only biked there a few times since she started cycling recreationally more than a year ago.

“I guess it sucks because I got hit next to the new bike counter, but despite my boyfriend’s protests, I will probably still bike in the future,” she said. “I really like it, it’s fun, it’s way faster than the Metro.”

The intersection of Lee Highway and N. Lynn Street has been the scene of numerous car-on-bike accidents, in large part because it puts which puts vehicle traffic from I-66 and heavy pedestrian traffic from the Mt. Vernon and Custis trails in conflict during the same green light cycle.

Advocates have been calling for changes to the intersection — perhaps even a pedestrian bridge or tunnel — for years. So far there are no definitive plans for significant safety improvement at the intersection.

More Stories
NOVA Legal Beat: Can My Employer Change My Job After Extended Leave?Peet’s Coffee Expected to Open in Shirlington Next Month