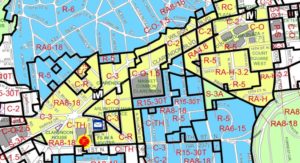 (Updated at 4:25 p.m.) The Arlington County Board adopted a new noise ordinance on Saturday in an attempt to balance resident complaints with business owners’ concerns.

Effective immediately, restaurant managers will be liable for the noise of their patrons if it can be heard in a residence 100 feet or more away from midnight to 9:00 a.m in mixed-use areas, which the county outlines in maps of areas like Clarendon, Ballston, Pentagon City and Columbia Pike.

“It’s our goal to always do the best we can to balance and be respectful of the quality of life to everyone that’s here,” County Board Chairman Jay Fisette said during the Board’s almost five-hour discussion of the ordinance at its Saturday meeting. “This is another set of tools, in my mind, that helps us to address the not widespread — but they do exist — impacts of noise.”

Residents of condominiums in Ballston and other of Arlington’s urban neighborhoods were calling for more restrictive rules, including setting quiet hours beginning at 11:00 p.m. nightly and from noon to 6:00 p.m. on Sundays. A committee of residents from the Alta Vista and Berkeley Condominiums in Ballston — both within steps of A-Town Bar & Grill — unsuccessfully proposed those stricter rules to the Board.

“[Responsible businesses] have nothing to fear from a strong noise control ordinance,” said Lee Austin, a member of the ad hoc condo committee. “Nor do we want to prevent young people from having a good time. But is it too much to ask they be respectful of residents in the neighborhood late at night and on Sunday afternoon? What we solicit protection from is the crowd noise that comes from irresponsible establishments that serve too much alcohol to too many people too long after they’ve had too much to drink.”

Clarendon and Courthouse residents sent a flurry of emails last week requesting similar restrictions, with former president of the Clarendon-Courthouse Civic Association Chris Keever telling the County Board that the ordinance appears “to have been drafted directly by bar owners who are not even trying to pretend they care about being good neighbors.”

Whitlow’s on Wilson owner Greg Cahill was the first of 17 speakers who addressed the Board about the ordinance on Saturday. He did not advocate for a specific enforcement time, but instead implored the Board to consider the business community as well as the residents when adopting the new regulations.

“We’re a little concerned it could be detrimental to our business,” he said. “Sometimes we don’t get busy until 11 or 12 at night. It could affect our business. It’s going to be hard for us to be responsible for actions people [take] when they’re waiting to get into our bar and restaurant.” 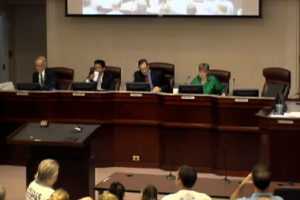 In addition to provisions dealing with mixed-use districts, the new ordinance makes it illegal for anybody or any group of people “to engage during the nighttime in yelling, wailing, shouting or screaming” in a residential neighborhood, if the noise can be heard within 20 feet inside an adjacent home or within 50 feet across a road or property boundary.

The ordinance adopted was revised from the version discussed last month that rankled Arlington’s private swim clubs. Those clubs are now exempted from the residential noise ordinance, provided that their meets that take place between 6:00 a.m. and 10:00 p.m.

The county’s Department of Community Planning, Housing and Development’s Code Enforcement personnel will pair with the Arlington County Police Department in enforcing the new rules. The new ordinance was written after a 2009 Virginia Supreme Court decision changed the way localities could enforce noise violations. The ordinance now establishes “Objective, quantifiable and defined measurement standards,” according to Arlington County’s press release.

Fisette called the ordinance a “work in progress” and said county staff should bring back any recommended changes at the ordinance’s one-year review. Fisette also made several references to “one establishment in Ballston” that “continues to cause problems for residents,” and said the Board will address that restaurant — understood to be A-Town — when its use permit comes before the Board for review.