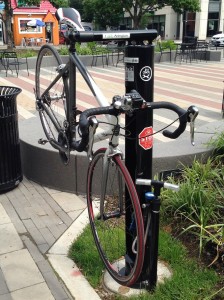 The exact site for the stand has yet to be announced, but BikeArlington expects it to be near the Pentagon City Metro station.

The stands house tools allowing cyclists to make quick fixes or adjustments, like filling tires with air or tightening loose bolts. BikeArlington program manager Chris Eatough noted the stands are designed to be durable for weathering the outdoors as well as being fairly theft-proof.

“The Fixit Stands have been well received and we see lots of people using them,” said Eatough.

Although Eatough doesn’t yet have a date for the installation of the new stand in Pentagon City, he said it should be soon. The stand already has been purchased and BikeArlington just has to finish working out the installation details.