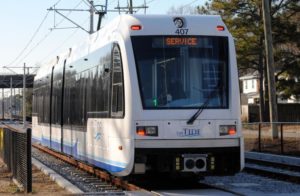 To try to reverse falling ridership, some are suggesting that the three-year-old Tide light rail line in Norfolk eliminate its $1.50 one-way fare.

(As pointed out by the Sun Gazette, Arlington County Board member Libby Garvey has held up the Tide as an example of why the county shouldn’t build the Columbia Pike streetcar system.)

Economic models presented by Arlington County suggest that the Columbia Pike streetcar’s estimated $287 million cost will be offset in the long run by new development and increased real estate values. Given that development is such an important component of the Pike streetcar’s return on investment, should rides on it be free?


Photo by Xshadow via Wikipedia