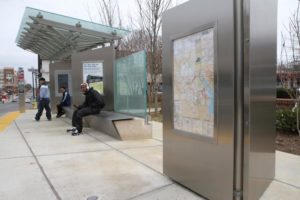 The $1 million “super stop” at Columbia Pike and S. Walter Reed Drive — the exorbitant price tag for which became national news — was so expensive because of poor communication, an independent review found.

The review, conducted by CliftonLarsonAllen, found that a “lack of clear communication between County and WMATA staff” and “poor execution of construction performance” were the main reasons the prototype took so long, and cost so much to build.

That poor execution includes the bus stop not being built to what was designed, including glass panels being produced at the wrong size; curbs being built at the wrong height and having to be redone; and a four-year delay in getting approval from the Virginia Department of Transportation.

According to the report, the initial budget of $2.15 million was supposed to cover three “super stops.” There was no communication between the county and WMATA over any change in the budget when plans for the two that were never built were ultimately scrapped. On Dec. 22, 2011, the county informed WMATA that it wanted to cease site work for the two other stops, called Dinwiddie West and Dinwiddie East.

“While it would appear the removal of site work for the two stops would result in a lower base cost… no official communication was made by the county to WMATA,” requesting the budget be lowered, the report states. “We find that the county should have requested a proposal for the deductive change order (lowering the budget), and then should have proceeded with negotiations” to change the terms of the agreement with WMATA

According to the review, $881,933 — less than the oft-cited $1 million — was spent on the prototype that still stands today, but $456,882 was sunk into the two prototypes that were never built.

“We accept the findings of this report,” County Manager Barbara Donnellan said in a press release. “They confirm concerns that we already had, and we have already addressed the issues systematically, so we can ensure that the remaining 23 transit stations will be built efficiently and cost-effectively. I asked for this review because, as I have said before, the Walter Reed prototype took too long and cost too much to build.”

The county announced in May that the remaining 23 transit stops would be redesigned with modular components, reducing the total project budget from $20.9 million to $12.4 million. Moreover, the county is now working independently of WMATA in designing and building the transit stations, which, when built, will accommodate both bus and streetcar passengers.

As opposed to the custom-built “super stop,” the transit stations have a modular design, with interchangeable parts that allow flexibility from station to station, and are significantly cheaper to build and maintain. Construction is expected to begin construction on the first eight transit stations by FY 2017.

“This project was an exception for Arlington,” Donnellan said. “We have a solid record of delivering large, complex projects in a timely, cost-effective manner… Unfortunately, work on the Walter Reed prototype began in 2007 at a time when WMATA was scaling back its capital improvement management program, and the project suffered as a result. Delivery was further complicated by the fact that several entities were involved. With the completion of this thorough review, we are confident that we are well positioned to effectively deliver the transit stations that the Pike needs, and continue to rebuild the Pike’s transportation infrastructure.”