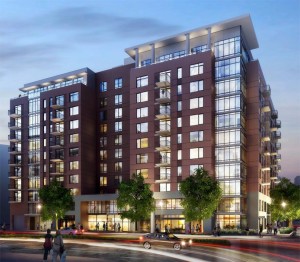 The high-rise apartment building that will replace the former Post Office on S. Eads Street expects to have shovels in the ground by the end of the month.

The building, at 1720 S. Eads Street, is being developed by Kettler and will be called m.flats, the same name of a recently opened Kettler apartment building on K Street NW in D.C.

The development, which was approved by the Arlington County Board last February, will be 11 stories tall with 198 units, comprised almost entirely of one- and two-bedroom apartments. There will be 176 spaces of underground parking, a “gaming area, fitness center, street entry bike room, and an all-season landscaped courtyard with fire and water features.”

“Our m.flats apartments are meeting a growing demand for living spaces within walking distance of work, shops and entertainment,” Robert C. Kettler, chairman and CEO of Kettler, said in a press release. “The thought process around m.flats recognizes the fact that many young people are forming families later in life. As a result, they not only want to enjoy the vibrancy of city life, but live in an apartment that has many conveniences and amenities.”

The construction is expected to be complete in October 2016. There’s no firm date yet on when construction will begin, according to a Kettler official, but the company is “pushing to begin work by the end of the month.”

The building was the first approved under the Crystal City Sector Plan, and Kettler agreed to keep 16 units at affordable rates and achieve a LEED Silver rating. The other 182 units will be marketed as “smaller, luxury units catering to single renters, young professionals and couples looking to share an apartment,” according to Kettler’s press release.

Kettler is currently in construction on the 411-unit Acadia building in the Metropolitan Park complex in Pentagon City.