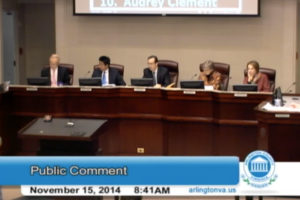 Of that money, $203.3 million has already been allocated for FY 2015 programs, toward county reserves or spent according to county policy.

This includes $46.7 million toward Arlington Public Schools and $62.4 million toward “maintaining the operating and self-insurance reserves” required to keep the county’s current bond rating.

A significant leftover sum is present nearly every year and was accounted for in the FY 2015 budget process. This year, there’s $29.8 million in discretionary funds remaining the county can spend as they see fit.

The County Board approved in a 5-0 vote the county manager’s recommendation to allocate:

Among the $13 million is $1.3 million for funding Artisphere. Next month, County Manager Barbara Donnellan will give the County Board a recommendation on the future of the facility, which was expected to be self-sustaining but instead requires millions of dollars in county funding per year.

Donnellan declined to give a preview of her recommendation, but said that even if the county decided to terminate its contract, it would still need to pay $1.1-1.3 million as part of its commitment to the owner of the building that houses Artisphere.

Last year, the county had a $25 million surplus and spent it on many of the same projects: Artisphere, employee compensation and affordable housing. During the County Board’s discussion on Tuesday, no Board member brought up the idea of directing funds elsewhere, including back to taxpayers.