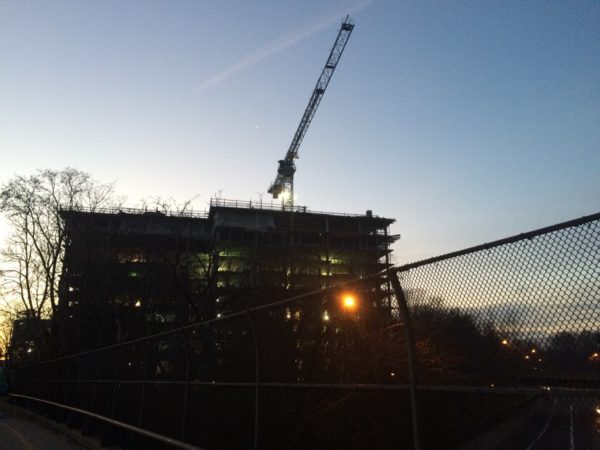 Blue, Orange, Silver Lines Suspended — Metrorail service on the Blue, Orange and Silver lines was suspended during the morning rush hour due to a water main break in D.C. Those in Arlington hoping to get to work via Uber were being charged four times the normal rate, thanks to the company’s “surge pricing” practices. An Arlington Alert, meanwhile, contained an oddly appropriate typo — it noted that service was suspended at “Farragut Wet” due to the water main break. [Washington Post]

Board: Traffic Light Coming in 18 Months — The Arlington County Board had good news for activists at its Saturday meeting: the traffic light they’re seeking at Columbia Pike and S. Frederick Street is coming. The bad news is that it could take up to 18 months. Board member Walter Tejada said that is “too long” and “we have to find a way to make it happen.” [InsideNova]

Zoning Change Advertised for Wendy’s Redevelopment — The County Board on Saturday voted to advertise a potential zoning change for 2026 and 2038 Wilson Blvd, the current site of the Wendy’s restaurant in Courthouse, which is slated for a redevelopment. Developer Carr Properties wants to build a 12-story office building on the site. Public hearings will now be held in advance of Board consideration of the rezoning request. [Arlington County]

Arlington Book Store Wins Grant — East Falls Church bookstore One More Page Books has won a $9,000 grant from novelist James Patterson. The store plans to use the grant to launch a “bookmobile” — a modified food truck that sells books around the community. [Washington Post]