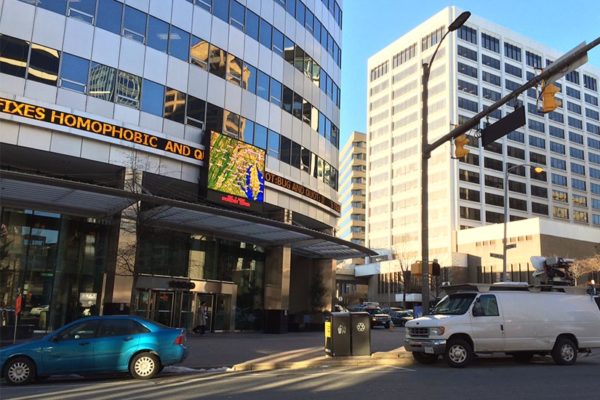 County Board Nixes TJ Elementary Plan — The Arlington County Board voted last night to refuse to allow Arlington Public Schools to build a new elementary school next to Thomas Jefferson Middle School, at least for now. Libby Garvey, a former school board member, was the lone dissenting voice on the 4-1 vote. She agreed with the school system that new elementary school seats are urgently needed in South Arlington. The board majority said the school system needs to go back and study alternatives again, since the elementary school could have negative impacts on the surrounding community. “You have to be a little more crowded for awhile,” County Board Chair Mary Hynes told school officials. [Washington Post, Arlington County]

Board Approves Overnight Gas Sales at 7-Eleven — Just down the street from Thomas Jefferson Middle School, on S. Glebe Road, exists a 7-Eleven convenience store and gas station that heretofore has not been allowed to sell gas from midnight to 6:00 a.m. The condition was put in place by the County Board in 1992, due to concern about traffic, noise and other neighborhood impacts. On Saturday the Board approved, with neighborhood support, a use permit change that will allow gas to be pumped 24/7. [InsideNova]

Board Approves Pentagon City Apartment Building — Also on Saturday, the County Board approved a new 20 story, 453 unit apartment building at 400 Army Navy Drive in Pentagon City. The developer of the project agreed to a nearly $10 million community benefits package and to building to LEED Gold sustainability certification standards. [InsideNova]

Jury Duty Phone Scam Returns — Once again, someone is calling Arlington residents, claiming to be a law enforcement officer and demanding payment over the phone because the call recipient supposedly failed to appear for jury duty. As it did last March, the police department is reminding residents that this is a scam. [Arlington County Police]

Octogenarian Still in the Marriage Business — Our Man in Arlington columnist Charlie Clark has a profile of Gerald Williams, who at age 82 is still performing 25-30 civil marriage ceremonies per week from a basement office in Courthouse. Williams was also profiled in a short documentary called “Arlington is for Lovers?” that was produced in 2010. [Falls Church News-Press]