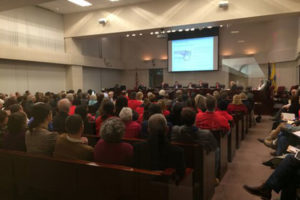 The Arlington County Board approved a 229-unit, eight-story affordable housing complex on the western end of Columbia Pike and 50 new townhouses to replace the historic George Washington Carver homes in Arlington View.

The Carver Homes were built in the 1940s for residents displaced by the construction of the Pentagon, and many of the families who lived there when it was built now own residences in the co-operative. While preservationists lament the loss of a piece of the county’s history, the residents urged the County Board to approve the development.

“I know first hand that our co-op has been deteriorating for many years,” Velma Henderson, a Carver Homes owner who has lived in the co-op for 68 of its 70 years in existence, told the Board. “Busted and frozen pipes, leaky roofs and crumbling foundations, to name a few… We have a long and proud history in Arlington, so it was important for Carver Homes to select a developer who had the vision and resources to create a high-quality development. This plan considers Carver Homes’ needs.”

The 44 units will be bulldozed and replaced with 50 townhouses, 23 of which will be duplexes. Six of the duplex units will be committed affordable units, and the developer, Craftmark Homes, also has agreed to build a public park on the property and extend S. Quinn Street through the parcel at the corner of S. Rolfe and 13th Streets. 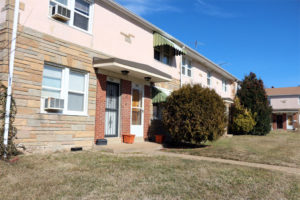 As part of the redevelopment, the developer will place two historic markers on the property signifying its history. Arlington is also beginning to compile an oral history of the property, which will be available at Arlington Central Library when completed.

“My mother’s dream was that we would benefit from the sale of the property,” said James Dill, a co-op owner whose mother was displaced by the Pentagon construction. “We’ve been banking on it for 50 or 60 years that, at some point in time, Arlington County would grant us our piece of the American dream, and we’ve been holding firm on that.”

The County Board unanimously approved the redevelopment. County Board Chair Mary Hynes thanked the owners — who have been working to sell the property for most of the past decade — and the community for their patience. Board member Libby Garvey remarked that many of the residents were forced out of their homes in the 1940s for the Pentagon to be built, and the Board could, in a very small way, “right that wrong.”

The conversation surrounding the Arlington Partnership for Affordable Housing‘s proposal for its new affordable housing buildings next to its expansive Columbia Grove community on S. Frederick Street was quite different. 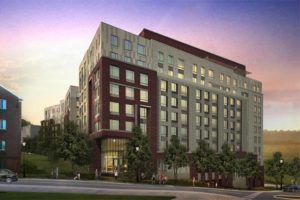 Dozens of speakers came out to speak on both sides of the issue, and public comment and Board deliberations lasted after midnight. Opponents, many of whom live close to the site, said there is too much concentration of affordable housing on the western end of Columbia Pike.

“Presently our community is home to about 18 affordable housing communities in the immediate area,” Erin Long, a homeowner in the Frederick Courts Condominiums across the street. “What’s become known as the western gateway node of Columbia Pike cannot sustain the affordable housing development as it’s planned.

“It’s clear that plan is for those units lost at the east end of the pike to be relocated to the west end,” she continued. “It’s absolutely inappropriate for every lost unit to be relocated to us. We deserve to benefit from the redevelopment of Columbia Pike, not serve as the repository for those displaced from other nodes.”

Other complaints surrounding the development revolved around its height; while it’s eight stories, it sits on a steep hill. Critics, including residents of the adjacent Carlyle House condos, which are directly north and front Columbia Pike, say the topography would make the building seem even taller than it is, and not conforming with the vision for the neighborhood plan.

Supporters of the plan included APAH board members and other affordable housing advocates, including Timothy Malone, the associate rector at St. Mary’s Episcopal Church and a member of Virginians Organized for Interfaith Community Engagement (V.O.I.C.E.).

The Board approved the plan 5-0, acknowledging the project was built in compliance with the code, but asking APAH to make adjustments to appease its neighbors. APAH now has clearance to build the project, which will include three levels of underground parking, a new playground, with 100 percent of the units affordable at a maximum of 60 percent of area median income, with some as low as 40 percent.

“APAH is deeply honored by the Arlington County Board’s commitment to affordable housing and we are excited to bring much needed affordable housing to Arlington as envisioned by the award-winning Columbia Pike Neighborhood Plan,” APAH president and CEO Nina Janopaul said in a statement Thursday.

As part of the project, the County Board approved an $18.9 million loan from the Affordable Housing Investment Fund. APAH expects construction to begin — assuming its state and federal financing is approved — in 2016.

After approving the project at about 12:45 early Wednesday morning, Hynes said “this was a momentous day,” but said the way in which the project came forward was far from perfect.

“This is a moment of taking the longer view and of understanding we’re at the beginning of a multi-year plan,” Hynes said. “I think there have been lessons learned. Know that we will all do better next time.”