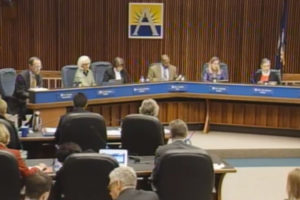 (Updated at 11:15 a.m.) The Arlington School Board has approved a proposed $555.9 million budget for the 2015-2016 school year, requesting $6.18 million more than County Manager Barbara Donnellan proposed in her budget.

Other savings came from moving money around, funding replacement buses and new technology with one-time funds from last year’s closeout budget as opposed to ongoing funding.

“We have now shrunk by $6.2 million, and that’s been a lot of hard work,” School Board member Abby Raphael said at the decisive meeting  last week. “Everyone was asked to really scrub their budgets and make changes, so we’re making some hard cuts and some hard choices … I think it is very reasonable, very responsible.”

The Arlington County Board will vote on its budget next week, and in the process it could either approve the School Board’s budget,  or force APS to make further cuts. If the School Board is not granted the $6.2 million, the next cuts to make would be step increases for staff, eliminating early release from the four elementary schools who still have it. APS could also increase class size by one, which would cut 55 jobs.

If the County Board approves the Board’s adopted budget, all early release programs at Arlington elementary schools would be a thing of the past, paving the way for broader implementation of the Foreign Language in Elementary Schools program.

The adopted budget would mean a cost-per-pupil of $18,558, APS’ lowest since FY 2012 and third-lowest since FY 2008. The Board and staff managed to reduce the cost from Murphy’s budget by $131, while adding new positions along the way.

“We’ve worked well together and stuck to our common values, which is what’s important,” School Board member Barbara Kanninen said. “The changes we’ve made, every one has been careful and deliberate with thought to the taxpayers dollars. When we made a new addition, it’s because we need it.”

Some of Murphy’s proposed cuts the School Board elected to restore, including the World Languages distance learning courses, and its six associated positions. The Board also added three facilities and operations positions to help with the ever-continuing school construction.

The Board also made community outreach a priority, adding a full-time family and community engagement coordinator and allocating $67,000 for “communications support” for the Board.