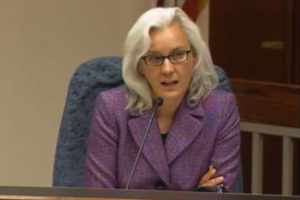 Despite some public backlash against the rollout of Arlington Public Schools’ initiative to equip each student with an iPad or Macbook device by 2017, the Arlington School Board is pushing ahead.

The initiative has already provided second- and sixth-graders with iPads and freshmen with MacBook Airs. Next year, devices will again be provided to students in those grades.

“We have conducted a very large pilot project this year in terms of this initiative,” Kanninen said, estimating about 3,000 devices are now in the hands of students. “That is a very large and potentially very informative data set. I made this motion because I believe it is now time to evaluate how it’s working and ask some basic questions. Is it helping students learn? Is it helping teachers teach?”

The Board and Superintendent Patrick Murphy had extensive discussions the week leading up to their meeting about the initiative, and the majority, including Murphy, agreed that an evaluation can be completed while pushing forward with handing out devices.

“I have moved from thinking we needed to pause to believing we can do that evaluation and do that assessment at the same time as we continue forward,” Board member Nancy Van Doren said. “Many people have called me about the problems we’ve been having … When I suggest pausing the program, I was surprised people said ‘don’t pause, just do it better.'”

Many of the complaints around the devices have focused on teachers not being adequately trained to use the devices, preventing an optimal environment for the students. Murphy said many teachers have “emerged as leaders” in using the devices while other teachers are more hesitant.

“I will say, with any new initiative, there have been a variety of issues with the rollout,” Murphy told the School Board. “We need to continue to strengthen our training models. I think we’ll continue to focus on professional development, working with families so they understand and working with safety, so students aren’t spending an excessive amount of time in front of these devices.”

The 1:1 Initiative is budget neutral because it is funded by diverting money away from APS’ annual technology replacement funds. While Murphy and the School Board majority acknowledged hiccups with the rollout, Kanninen pushed for a more detailed look at what went wrong.

“One of the main reasons a pause would be necessary is we also need to ask, “are we implementing this model the right way?'” she said. “There are other models and ways we could be rolling this out. By taking a pause here, we then can work on developing curricula, designing professional development programs, developing our principles for use, clarifying our budget implications.”

School Board member Abby Raphael said many of the concerns expressed in the community have been alleviated by a more thorough explanation of the program.

“It’s all about personalizing learning, it’s not about the devices,” she said. “I agree that we can continue to roll this out and evaluate what we’re doing, because I really do think this is a very valuable tool in eliminating the achievement gap.”