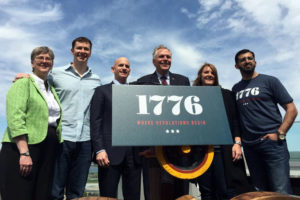 The heralded 1776 tech incubator and seed fund is moving into Crystal City, bringing tech bonafides and millions of dollars with it.

“We’re proud that this new partnership will be anchored in Crystal City, which is increasingly becoming a globally-recognized home for world-changing startups,” McAuliffe said. “This new, unprecedented level of regional collaboration removes the traditional regional boundaries, creating tremendous opportunity for broad-based economic growth that benefits the entire region, and offering a model for future, long-term economic growth throughout Virginia and the D.C. Metro area.”

As part of its deal to expand in Crystal City, 1776 acquired Singh’s Disruption Corporation, a combination of a venture fund and financial advisory firm. Disruption’s headquarters on the 10th floor of 2231 Crystal Drive will be 1776’s base of operations in Arlington, according to Crystal City Business Improvement District Angela Fox.

“One of the beauties of Crystal City is there is so much space to expand, and if they do well, that’s certainly the thinking in all of this,” Fox told ARLnow.com this afternoon.

Earlier this week, 1776 announced a partnership with Montgomery County, and the incubator’s announcement today makes it one of the, if not the premier, dominant forces in the D.C. area technology space. In 1776’s new headquarters, it will already have member companies like Bloompop, Power Supply and Onomono Media.

1776 also hosts the Challenge Festival, an international, weeklong festival aimed at bringing together entrepreneurs in the energy, education, health and transportation sectors. The company anticipates more than 10,000 industry members will attend, and the opening party will be in Crystal City, at 2121 Crystal Drive, on May 8 from 7:00-11:00 p.m.

The incubator hopes to leverage the still-significant hub of government agencies and contractors in Crystal City, as well as the close proximity to the Pentagon, in its latest expansion.

“This region’s growing innovation economy and its future economic growth are closely linked, which is why at 1776 we’ve focused our attention on creating new opportunities for regional innovation and unfettered access to the networks that exist across regional borders,” 1776 co-founder Donna Harris said in a press release. “Between our partnership with Vornado and the acquisition of Disruption, this exciting new venture will allow us to bring together ALL the tremendous assets this region has to offer, from the NIH and MedStar in Bethesda to the Pentagon and Lockheed Martin in Crystal City, and create one of the most vibrant technology communities in the country.”