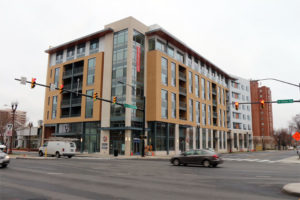 The average apartment in Arlington was 5 percent cheaper in 2014 than in 2013, according to the county.

Last year, the average rent in Arlington was $1,834 per month, according to the Dept. of Community Planning, Housing and Development.

This drop in average rent comes at the same time as soaring assessments for residential properties — the average assessment in the county went up 4.9 percent, with some areas increasing by an average of 11 percent year over year. That jump, concentrated in some of the poorest areas in the county, cost homeowners an additional $400 in tax bills this year compared to last.

The higher assessments also hit the apartment market — existing apartment assessments jumped by 4.7 percent in 2015, but it appears that price bump has not yet been passed on to apartment renters.

It’s unclear if the two-year decline in rents is a trend or a blip. Arlington’s rental vacancy rate is at 3.8 percent — its office vacancy is at 20.4 percent, by comparison — and there are currently 2,055 net new apartment units under construction in the Metro corridors, per planning staff. Some of those units — like the Central Place development in Rosslyn — won’t come online until after 2016.

Since 2000, Arlington has added more than 23,000 residential units in the Metro corridors, many of them upscale rental apartment buildings. Metro ridership continually increased over that time, until recently. From 2010 to 2014, Arlington lost several thousand weekday Metro riders in both of its Metro corridors.

So far, developers aren’t showing signs of being scared off. Arlington still projects its Rosslyn-Ballston and Jefferson Davis Highway corridors will add a combined 35,000 apartment units by 2040.

END_OF_DOCUMENT_TOKEN_TO_BE_REPLACED

More Stories
Housing Homeless Vets in the Shadow of the PentagonWWBG: Canned Applause