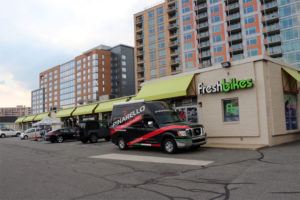 The popular Tuesday Night Rides that take hundreds of cyclists from Ballston to N. Military Road during the summer will not be canceled and were only postponed because the organizer applied for the permit too late, county officials say.

The rides have been organized by FreshBikes owner Scott McAhren for eight years, growing from a few dozen people to as many as 500, and in recent years they have been accompanied by a police escort. The first ride was scheduled for this week, but it was cancelled after McAhren didn’t secure a permit.

On Tuesday, McAhren told ARLnow.com that he reached out to the county “earlier this year” when a special events staffer told him “there’s almost a zero percent chance we’re going to approve it every week again.”

Now, on FreshBikes’ website, McAhren wrote he applied for a permit April 22, less than three weeks before the first ride was scheduled. Special events permits typically take 90 days to process.

“The May 5 ride was canceled because the County got the Special Event Permit on April 22, which was too short notice to process the event with all the appropriate County departments,” he wrote on the website.

“He said to us that he woke up in the middle of the night and realized he forgot to file the permit application,” Curtius said. “This is not about if we were thinking about killing the bike program.”

McAhren and the county are planning on holding a permit hearing on May 19, when representatives from the parks department, police, fire and rescue and other counties will weigh in on what support the event will require and how much compensation the county would need from the organizer. The county anticipates approval, with the rides starting up again next month.

“We approve virtually every permit for a special event,” Curtius said. “It has to go through the process, it goes through fire, police, water and streets. That has to all be assessed and then they issue the permit. Almost always permits get issued.

“It is true that there have been complaints about this event, there have been complaints about other events too,” she continued. “But what happens in that case is we work with the event organizer. The whole emphasis and the whole bias is toward finding a way to making these events happen, and that’s certainly true when it comes to bicycling events, because we’re a very bike-friendly community.”