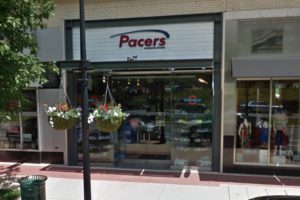 Pacers will close its running store on Pentagon Row next month, the company announced this afternoon.

The store, at 1101 S. Joyce Street, is being moved to a new Pacers location at 300 Tingey Street SE, in the District’s Navy Yard community.

The Pentagon Row store will close its doors on June 28, while the Navy Yard location is expected to open in late August. The Pacers location at 3100 Clarendon Blvd in Clarendon will remain open and will be the local chain’s only Arlington location.

The Pentagon Row Pacers opened in spring 2009, after the company bought and took over the storefront of the Gotta Run Running Shop, which originally opened in 2004, according to Pacers CEO Kathy Dalby.

Dalby said that the popular Pacers races in Pentagon City and the Pentagon Row store’s active running club will continue even after the store closes. She said the decision to close the store was mostly about its small size.

“Pacers Pentagon Row has a great following, especially the groups that run with us weekly out of the shop,” Dalby said. “However, the size of the store — our smallest at 1,200 square feet and 60% smaller than our average location — limited our ability to provide the full breadth of product our customers have come to expect from Pacers Running.”

“We look forward to still supporting runs and races from Pentagon Row and [continuing] to be an integral part of the South Arlington fitness community,” Dalby continued.

Separately, Pacers also announced that it will be moving its existing location near Logan Circle in D.C. to a larger storefront at 14th and S Streets NW. That move will take place around the Fourth of July holiday.