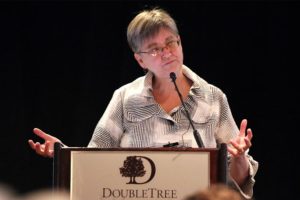 Arlington County Board Chair Mary Hynes told the Arlington Chamber of Commerce today that the cancellation of Arlington’s streetcar project was the toughest decision she made during 20 years in office — and she’s still not sure of the long-term consequences.

Hynes, who’s retiring at the end of the year, made the remarks during a question-and-answer session following her “State of the County” address.

“The hardest decision I had to make not just on the County Board but in 20 years of elected office was to discontinue the streetcar,” said Hynes, who previously served on the School Board for 12 years.

“The reasons had to do with my belief and care for the community overall,” Hynes explained. Given the strong opposition to the streetcar, “I really didn’t believe there was enough bandwidth in our community to address these other pressing needs. Everything was being evaluated under this streetcar lens, not on its own merits. I was worried that we were going to miss other things that needed to be attended to if we continued to keep it alive.”

Hynes still suggested that the streetcar was a sound plan to improve transportation on Columbia Pike.

“Let me just say for myself personally, if the plan that the Board adopted for Columbia Pike continues to build out, I don’t have a whisper of a doubt that bus service will be insufficient in the long run,” Hynes said. “But our community wasn’t there, our community didn’t understand it, and it was just coloring the conversation to an extent where we couldn’t move forward.”

Hynes said her second-toughest decision was on the 2012 update to the county’s sign ordinance. The Board was considering more restrictive measures, including a ban on roofline signs on office buildings that was supported by Walter Tejada and Chris Zimmerman. Ultimately, Hynes sided with Board members Jay Fisette and Libby Garvey, plus county staff and the business community, in arguing that banning such signs would discourage businesses from locating in Arlington.

“I was the swing vote,” she recounted. “I thought my job was to find the compromise.”

During the speech, Hynes said Arlington is unlikely to experience the rapid economic growth of the early- and mid-aughts again, at least any time soon, due to economic pressures from federal government belt-tightening to regional competition with Fairfax County and the District.

“The reality is that those incredible ups that Arlington experienced will not be coming again,” she said.

Hynes encouraged the business community and the next generation of Arlington leaders — she and Tejada are both retiring from the Board at the end of the year — to continue to honor Arlington’s values of diversity and inclusiveness, make long-term investments in infrastructure like Metro, and build consensus for decisions through robust community processes involving residents and other stakeholders.

“I challenge each of you to be part of the solution,” she said. “I look forward to watching it on TV.”