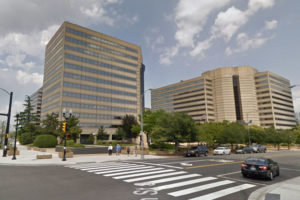 The Transportation Security Administration will move from its headquarters in Pentagon City to a new office in Alexandria, the federal government announced today.

TSA currently occupies a complex at 601 and 701 12th Street S. in Pentagon City, across from the Pentagon City mall.

It’s planning to move to the Victory Center building at 5001 Eisenhower Avenue, near the Van Dorn Metro station, in about two years. (In 2013, the TSA renewed its lease in Pentagon City for five years.)

The General Services Administration touted the new lease as a money-saving move that will save taxpayers more than $95 million over a 15-year lease. The government is paying rent of $36 per square foot, more than 25 percent below projected market rents, and getting $50 million for tenant fit-out costs and moving expenses.

“This is yet another great GSA-negotiated deal for government and the American people,” said GSA’s Darren Blue, in a press release. The new lease agreement allows TSA to consolidate four locations into one at a rental rate and utilization rate that will ensure the agency is more efficient and effective in executing its mission.”

The City of Alexandria was similarly triumphant in its announcement of the deal.

“GSA’s decision to locate the TSA headquarters at Victory Center is a huge economic boost for Alexandria as a whole, and for the West End in particular,” said Mayor William Euille. “The City is working on a small area plan for Eisenhower West that encourages new investment, redevelopment and business activity. TSA will serve as a catalyst, and will add a daytime office population and on-site retail activity to this developing market.”

TSA has about 3,400 employees at its headquarters, which will boost total employment in Alexandria by four percent after the move from Arlington, according to an Alexandria press release.

“Over the initial 15-year lease, the headquarters is expected to generate close to $16 million each year for Alexandria’s economy,” the city said. “The economic impact includes new salaries and wages for Alexandria residents, and spending by TSA employees and visitors at local businesses. Occupancy of the existing Victory Center building will result in a 3.0% decrease of the City’s overall office vacancy rate (from 16.5% to 13.5%), making it one of the lowest in the Washington, D.C. region.”

This is just the latest office loss for Arlington County, which is coping with relatively high office vacancy rates.

Victor Hoskins, who took over as the county’s head of economic development earlier this year, said the county was disappointed but not surprised by the deal.

“Obviously, we’re very disappointed in the decision to relocate from Arlington,” Hoskins said. “The TSA has called Arlington home for quite some time, and the County worked aggressively throughout the procurement process to try to keep the agency here.  The decision aligns with the trend of valuing direct occupancy costs (rent) over the overall costs of siting federal facilities.”

“This move represents a challenge, but not one that was unexpected,” Hoskins continued. “We pledge to continue to move forward with our strategy of diversifying Arlington’s economic base and focusing on bringing fast-growing technology companies, particularly those in the fields of cybersecurity, ed tech, med tech, big data, clean and green tech, and nonprofits/associations, to Arlington.”

“It is a different strategy than Arlington has experienced in the past, but one that we believe will drive us ahead in the future of the office market,” he said.