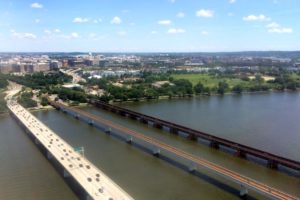 Metro riders who take the Yellow Line between Virginia and D.C. will see some slowdowns while crossing the Potomac River.

WMATA says it has placed a speed restriction on the bridge, limiting trains to just 15 miles per hour. The restriction is “part of Metro’s aggressive campaign to fix track conditions identified following inspections after the derailment of a non-passenger train in early August,” the transit agency said online.

Replacement of metal fasteners on the Yellow Line bridge is currently underway, Metro said, but may take 6-8 weeks.

Additional 15 mph restrictions are in place on the Orange, Silver and Blue lines between Foggy Bottom and Farragut West, and in three sections on the Red Line. Readers and an ARLnow.com reporter have also observed trains running slowly in a portion of the tunnel between Rosslyn and Foggy Bottom.

In addition to the slow restrictions, Metro says it has also placed “medium restrictions” of up to 40 mph in certain parts of the Metrorail system.

It's taking a while to get across the Yellow Line bridge #wmata @nbcwashington pic.twitter.com/76d9kvAX0V