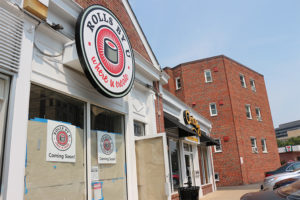 Rolls By U, a new sushi restaurant coming to the Colonial Village Shopping Center on Wilson Blvd, is hoping to open its doors mid-September.

There is no target date for the new restaurant, according to one of its employees. Rolls By U announced the mid-September opening on its Facebook page on Aug. 26.

The sushi restaurant’s slogan is “where you create,” implying that it may be a make-your-own sushi concept. On social media, the restaurant says it will offer “organic, healthy, and flavorful sushi for your senses and your soul.”

Brown paper still covers the window, but construction crews could be seen inside this afternoon.

Rolls by U will be at least the fourth sushi restaurant in Rosslyn, with Kona Grill, Kanpai and Cafe Asia all nearby, along Wilson Blvd.