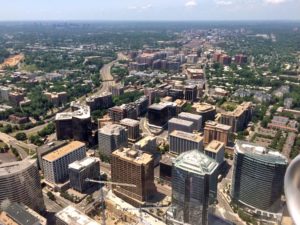 Arlington’s office vacancy rate has dropped for the first time in more than five years.

County officials touted the 1.6 percent drop in the vacancy rate in a press release (below), while admitting that the rate — 20.8 percent — is still too high and there’s “much more work to be done.”

The county says recent high-profile victories — bringing the 1776 tech incubator and the new U.S. headquarters of the Lidl grocery chain to Crystal City, for instance — came as Arlington leaders are pursuing “a new strategy of diversification, aggressive marketing and emphasis on fast-growth tech companies.”

High commercial office vacancy has hurt Arlington County’s finances, as commercial buildings make up about half of the county’s tax base. The vacancy rate has been exacerbated by a number of factors, including the Base Realignment and Closure Act (BRAC), federal budget sequestration and the loss of several large government offices to Alexandria, where rents are cheaper.

The county’s press release, after the jump.

Arlington’s office vacancy rate dipped 1.6 percent at the end of the third quarter of 2015, the first time that rate has dropped appreciably in more than five years. The drop, which can be credited to announcements such as incubator 1776’s move to Crystal City and international grocery store chain Lidl’s announcement to bring its U.S. headquarters to Potomac Yards, comes as Arlington is pursuing a new strategy of diversification, aggressive marketing and emphasis on fast-growth tech companies.

“It is encouraging, after five years of a rising office vacancy rate, to see that rate nudge downward,” said Acting County Manager Mark Schwartz. “The improving economy, the Board’s decision to put more funding into Economic Development, and our much more aggressive efforts to attract, retain and grow businesses here in Arlington are all beginning to pay off. We’ve made progress, but there is much more work to be done.”

“We still have a long way to go,” agreed Victor Hoskins, Director of Arlington Economic Development. “This is just the beginning, and there will undoubtedly be more fluctuations as we move forward. However, this is proof that our new Way Forward strategy of diversification is indeed the right direction for us.”

Arlington closed 30 deals so far in 2015, representing nearly 3,000 new or retained jobs and more than 800,000 square feet of office space. Arlington Economic Development’s new marketing initiatives range from promotion at national and international events to competitions encouraging startups to bring their business to Arlington. Arlington also will be the sole U.S. host location for the international Dongsheng Technology and Science Park entrepreneurship competition later this year.

“Our efforts have generated more than 2,000 leads from 30 states and eight international countries this year alone,” said Hoskins. “We are diligently working now to qualify those leads and follow up with companies who may benefit from bringing their business to Arlington. The key is diversification – bringing new and interesting companies to our area.”