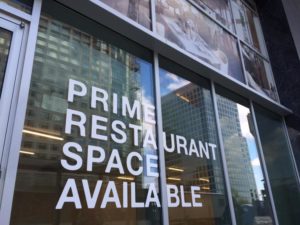 Two feet of snow wasn’t enough to close many Arlington eateries, and it’s not changing anything about our event tonight on Arlington’s restaurant industry.

ARLnow Presents: Running a Restaurant in Arlington will take place from 6 p.m. to 8 p.m. tonight at A-Town Bar & Grill (4100 Fairfax Drive). It’s completely free to attend and a great excuse for getting out of the house and shaking off cabin fever.

Fox 5 contributor Sarah Fraser will host a panel discussion with some of the brightest starts of the local restaurant biz, including Tim Ma of Water & Wall, Mark Fedorchak of Liberty Tavern, Scott Parker of A-Town Bar & Grill, Mikala Brennan of Hula Girl and Javier Candon of SER. 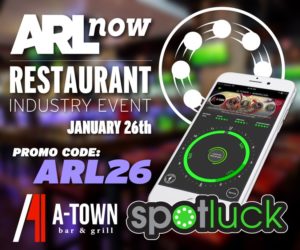 If you’ve ever read the comments section of a restaurant-related article on ARLnow.com, the topics of discussion may seem familiar: What makes some restaurants succeed and others fail? Why are there so many or so few of certain types of restaurants in Arlington? What are the biggest challenges of opening a new restaurant in Arlington?

There’s plenty of room in A-Town, but you may want to arrive early to try to snag a seat. The program will get underway shortly before 6:30.

Also tonight, reps from the locally-made restaurant discovery app Spotluck will be on hand to talk briefly about the app and its local offerings. If you haven’t checked out Spotluck already, be sure to download it and enter the promo code ARL26 while setting it up.

After the jump: the bios of each of our panelists.

Scott grew up working in restaurants near Atlantic City, New Jersey. A graduate of James Madison University, Scott worked for Morton’s The Steakhouse on Connecticut Avenue for 4 years while living in Arlington before starting A-Town Bar & Grill with Mike and Nick Cordero. Together the trio also own Don Tito in Clarendon, and the soon-to-open Barley Mac in Rosslyn.

Chef Tim Ma has taken a very non-traditional route to becoming a chef. Trained as an engineer with a degree from Georgia Tech and a master’s degree from Johns Hopkins, he worked in the top secret defense industry for 8 years before making the leap of faith into pursuing his dream of becoming a chef and owning restaurants. He opened his first restaurant, Maple Ave Restaurant in Vienna in 2009, and is now the founder of the Tim Ma Restaurant Group. His group includes the acclaimed Water & Wall restaurant in Arlington, VA, Gather + Feast – a traveling chef tasting table, Chase the Submarine in Vienna, VA, and Kyirisan an Asian-French bistro opening in Shaw, D.C. in early 2016.

Javier oversees front and back of the house operations at SER. He has more than 20 years of experience with both casual and fine dining establishments. His previous experience includes international work with leading hotels and world-renowned restaurants throughout Europe and the Caribbean, including the Hotel Melia Sevilla, Taberna del Alabardero, and Casa del Duque Vinoteca and Restaurant in Spain; Hotel Relais & Chateau Mas D’Artiny in France; and the Hotel RIU Melao and RIU Palace Macao in the Dominican Republic. Javier graduated with honors from Europe’s prestigious Escuela Superior de Hosteleria de Sevilla. A native of Spain, he is fluent in Spanish, Portuguese, French, and English. In his spare time, he fervently watches Real Madrid games, cooks with his favorite 5 and 8 year olds, and dreams about his next restaurant adventure with wife Christiana.

Born & raised in Hawaii, Mikala Brennan wanted to bring the Aloha spirit of her youth to DC. Decked out like a 1960’s Woody, her Hula Girl truck launched in 2011 serving up authentic and grilled to order teriyaki steak, chicken and tofu and authentic tastes of Hawaii to eager Washingtonians. Featured on the Travel Channel twice — on Andrew Zimmerman’s Bizarre Foods American (one of Andrew’s top 5 picks) and Street Eats — the Hula Girl Truck has gained enormous momentum in D.C. Hitting up the local scene through social media, Brennan has also been published in the Washington D.C. Chef’s Table cookbook and more recently in Behind the Food Carts. She was also on the Food Network competing on ReWrapped in 2014 — where she beat two contestants for the win. Brennan is no stranger to the restaurant scene. She opened her first restaurant in 1998 in San Diego, CA, becoming one of the market leaders in a small group of women chefs & restaurateurs in the area. She sold the venture to a business partner in Canada and was tapped by Marriott International to lead their new food and beverage department, bringing her hands-on, from scratch cooking approach into this hotel giant’s corporate structure. Then in 2001, she struck out again on her own to create Evolve Consultants. Under this company, Brennan created, designed and opened over 40 concepts both domestically and internationally.

Mark Fedorchak has been a partner of The Liberty Tavern Tavern Restaurant Group since its inception in 2007. Mark has always loved the hospitality business — his first job ever was waiting tables at the age of sixteen in a small Italian restaurant in his hometown of Binghamton, NY. He also had a desire to be an entrepreneur from a very young age. While earning a degree in Business Management in Syracuse, NY, he worked in various positions at the Holiday Inn, Outback Steakhouse and Carrabba’s Italian Grill. Mark graduated, and then moved to Washington, DC where he immediately began honing his fine dining skills at the the award-winning restaurant Zola. By the age of 24, Mark and his business partners began to conceptualize The Liberty Tavern in Arlington, VA. When it opened in 2007, The Liberty Tavern quickly became known for its top-notch food, excellent service, and great bar scene. Over the years, it has won critical acclaim — it was listed in Washingtonian Magazine’s Top 100 DC Restaurants eight years in a row, and earned the “Best Neighborhood Gathering Place” RAMMY Award in 2009. In April 2010, Mark and his partners added a nearby coffee shop and wine bar called Northside Social to The Liberty Tavern family, and it’s been a success by any measure. Northside Social was recently listed “Best Coffee Shop” in Arlington Magazine’s 2016 “Best Of Arlington” issue. Shortly thereafter, the team opened another full-service restaurant, Lyon Hall, right down the street. Lyon Hall is a casual European brasserie, and has enjoyed much critical acclaim — just last week it was listed in Washingtonian Magazine’s 2016 Top 100 DC Restaurants.

END_OF_DOCUMENT_TOKEN_TO_BE_REPLACED

More Stories
Another Crash on SB I-395 Near Washington Blvd RampLetters: Arlington Residents Complain About Slow Snow Cleanup, Other Things