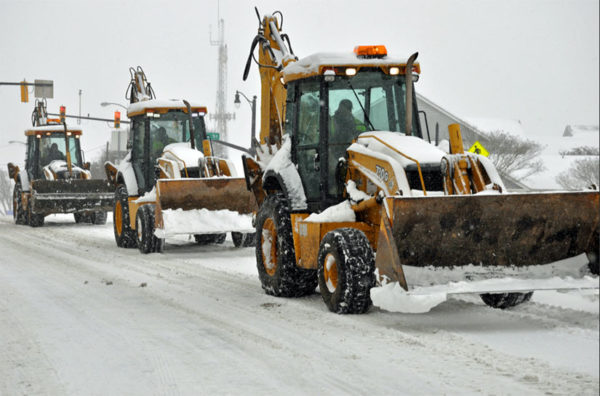 Arlington County and other D.C. area jurisdictions simply do not have the resources to clean up quickly from a monster snowstorm like this past weekend’s blizzard, officials told the County Board yesterday afternoon.

“We do not pretend to have the equipment and staff to handle this kind of record storm,” said County Manager Mark Schwartz. “It takes time. We don’t spend to the level of equipment or staffing, nor do our sister jurisdictions, to rebound as quickly as we would like when a record event happens.”

Schwartz said snow removal crews — both county employees and contractors — have been working around the clock in 12-hour shifts, operating all the heavy equipment the county has to muster, to try to massive amounts of snow from local roads. 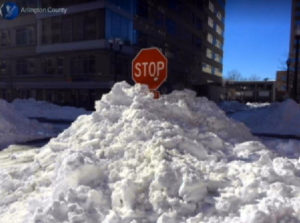 “They’re all pretty exhausted, but they’re committed to doing their jobs,” said Schwartz. “They’re been working flat out as hard as they can.”

Both Schwartz and Greg Emanuel, head of the county’s Dept. of Environmental Services, acknowledged that the county had been receiving a high volume of complaints from residents about the slow pace of snow removal on certain residential streets. Complaints have been flooding in via email, online form submissions and phone calls, Emanuel said, and county staffers were doing their best to “triage” the feedback.

“We are very much in the middle of this fight,” said Emanuel, who offered a hopeful estimate that all residential streets would be plowed by the end of the day today (Wednesday). Among the problems faced by crews: the snow was too deep and too heavy for traditional plows to be effective in many cases, necessitating the use of front end loaders and other heavy equipment.

“We’re getting to [local streets] systematically, slowly and steadily,” Emanuel said. “Much of our equipment could not plow through the 18 inches due to the physics of the matter.” 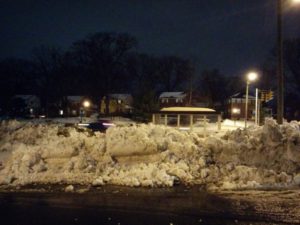 The county has a snow removal plan that calls for major traffic arteries and roads in high-density neighborhoods to be cleared first, followed by residential neighborhood streets. Particularly hilly residential streets and streets near schools typically get priority, but it’s otherwise left up to snow crew leaders on the ground to decide how to prioritize residential plowing, Emanuel said.

The seeming randomness of why one street might be plowed while another nearby is left impassible has frustrated some residents, as has the fact that the county’s online snow removal progress map has often been wrong. Schwartz and Emanuel said numerous complaints were from residents whose streets were marked plowed on the map but were, in fact, still snow-covered.

During the discussion of the map, County Board member Jay Fisette suggested that it might be better to scrap the map than to confuse residents with incorrect data.

Another frequent complaint of residents is that county-run bike trails like the Custis Trail were cleared well before many neighborhood streets. Parks and Recreation Director Jane Rudolph said the road and trail efforts are separate and run concurrently. She explained that the resources used to plow the trails — two pieces of equipment and four Parks and Recreation employees — were not transferrable to road clearing.

“These are not resources that could be deployed to the street,” Rudolph said. The County Board included funds specifically for trail plowing in its previous budget.

While praising the dedication of snow removal crews, County Board members said there might be room to improve the snow clearing program and make it more efficient. As a first step, the county plans to solicit more public feedback on the snow removal effort next month.

Schwartz said possible ways to improve the process could include the Board granting the County Manager the authority to impose “odd/even” parking restrictions, limiting parking to only one side of the street during snow events. Cars parked on either side of residential streets narrowed the path for plows and slowed snow crews, Schwartz said.

Some other tidbits from yesterday’s snow removal discussion: