It was hard enough for many Arlington residents to leave their house during last weekend’s blizzard — literally, two-plus feet of snow blocked many doors from opening — so imagine how hard it was to run a restaurant during the storm.

Yet, local establishments like A-Town Bar & Grill, Don Tito and Liberty Tavern did just that.

On Tuesday night, at ARLnow Presents: Running a Restaurant in Arlington, several prominent Arlington restaurant owners told attendees how they pulled it off. 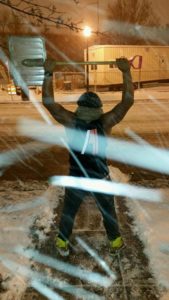 Scott Parker, co-owner of A-Town and Don Tito, said his company paid for staff members to stay in nearby hotels — the Hilton in Ballston and the Holiday Inn in Courthouse — so they could get to and from work safely.

“We booked a big block of rooms in both of those… it was a big slumber party with all of our staff,” Parker said. “We were worried that if we sent people home and they fought through the storm on Friday night, they would then have to fight through it again to get back to work on Saturday, and that wasn’t really fair.”

Mark Fedorchak, co-owner of Liberty Tavern, Northside Social and Lyon Hall, said he and his team managed to keep Liberty Tavern open all weekend courtesy of an employee with a big SUV.

“We had one staff member with an ’85 Ford Bronco with huge wheels, that was able to go around and pick people up and take them back home all weekend long,” Fedorchak said.

Tim Ma, chef and proprietor of Water and Wall in Virginia Square, opened the restaurant on Sunday with only two staff members: his general manager and a server.

“I was able to get out of my house but the rest of my staff wasn’t,” said Ma, who was a 2015 “Culinary Rising Star of the Year” Rammy Award nominee. “I went into the kitchen, no dishwasher and no cook, and cooked the entire day by myself. We ran the entire day, with decent business, by ourselves.”

The next ARLnow Presents event, featuring new County Board members Katie Cristol and Christian Dorsey, will be held at Mad Rose Tavern (3100 Clarendon Blvd) on Feb. 10.