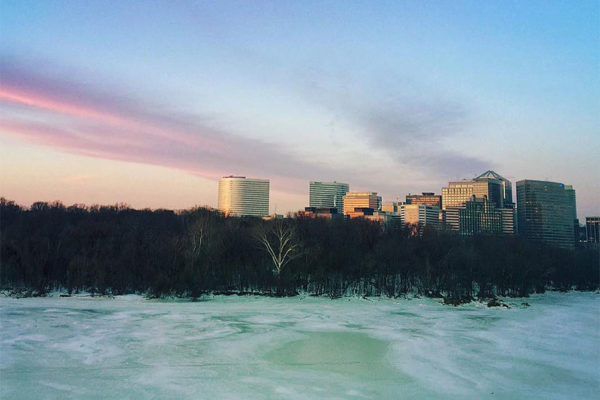 In Rosslyn: WJLA Stays, Politico Implodes — In Rosslyn yesterday, there were two big pieces of local media news in the same building, on the same day. First, it was announced that Sinclair Broadcast Group signed a five-year, 100,000 square foot lease that will keep WJLA and NewsChannel 8 in the 1000/1100 Wilson Blvd twin towers. Later, it was revealed that Politico — which renewed its lease in the same complex in 2014 — would soon be losing CEO Jim VandeHei, chief political reporter Mike Allen and three senior executives. [Washington Business Journal, Huffington Post]

Arlington OKs Gondola Study Contribution — Arlington County will kick in $35,000 to study the feasibility of a gondola running from Rosslyn to Georgetown. Some County Board members expressed skepticism of the plan, though the county’s economic development director said it would at minimum give local hotels and tourism a boost. [Washington Post]

New Rules for Bus-Only Lanes — New rules have been approved for the Crystal City Potomac Yard Transitway. After it opens this spring, the transitway’s lanes in Crystal City will be designated bus-only during the morning and afternoon rush hours. Police will issue warning to drivers who violate the rules during the first 30 days, then will issue $200 fines to lane violators after that. [WTOP, Arlington County]

EatBar Returns… On Capitol Hill — EatBar, which closed in 2014 in Lyon Park, will be coming back as a new bar/restaurant on Capitol Hill’s Barracks Row in D.C. [Barred in DC]

END_OF_DOCUMENT_TOKEN_TO_BE_REPLACED

More Stories
Decal Contest Winner: Photo of Neon ‘Arlington’ SignHere Are the Top 10 Books and DVDs at Arlington Libraries in 2015