Update at 8:35 p.m. — The northbound GW Parkway is closed from Spout Run to the Beltway due to large potholes in the roadway. Drivers should expect heavy traffic on the Spout Run Parkway, and at Lee Highway at N. Kirkwood Street.

N/B parkway from Spout Run to 495 closed due to potholes. Crews onsite and working to repair.

Update at 7:30 p.m. — Firefighters are on scene of a car disabled due in high standing water on Route 110 between Rosslyn and the Pentagon. A large pothole is also being reported in the roadway, in the same area as yesterday’s “monster pothole.” Separately, the standing water near the ramp from WB Route 50 to Washington Blvd is reported to be some 10 inches deep.

Update at 7:25 p.m. — Large trees are reported to be down near the intersection of Arlington Ridge Road and 23rd Street S., and N. Taylor Street and 24th Street.

Update at 7:10 p.m. — Dominion has just updated their power outage numbers: more than 4,500 Dominion customers in Arlington are currently without power, the company reports. The largest outage is reported around Lyon Village, Virginia Square, Colonial Village and Rosslyn. Another is reported around Virginia Hospital Center.

Dominion is reporting more than 14,000 outages throughout Northern Virginia.

@ARLnowDOTcom there is also a power outage in Lyon Village/Lee Highway. Lights flickered then went back out

Update at 6:55 p.m. — There are major delays for those flying into Reagan National Airport tonight. There are also 30-45 minute delays for departing flights. From the FAA:

Due to WEATHER / THUNDERSTORMS, there is a Traffic Management Program in effect for traffic arriving Ronald Reagan Washington National Airport, Washington, DC (DCA). This is causing some arriving flights to be delayed an average of 2 hours and 12 minutes. To see if you may be affected, select your departure airport and check “Delays by Destination”.

General Departure Delays: Due to WX:Rain, traffic is experiencing Gate Hold and Taxi delays between 30 minutes and 44 minutes in length and decreasing.

Update at 6:45 p.m. — Firefighters have been dispatched to a house near the intersection of N. Oakland Street and 20th Street for a report of a house struck by lightning.

@ARLnowDOTcom Did anyone just see that lightning strike in VA Square? Looked like it struck on Nelson st but could have been farther away

There was no fire found in house struck by lightning on N. Oakland and 20th St. Units are returning to service. pic.twitter.com/bl1iQjRXjC

Update at 6:40 p.m. — Arlington and Fairfax County firefighters are currently on the scene of a swift water rescue near Little Pimmit Run and the Old Glebe neighborhood.

Update at 6:30 p.m. — Westbound Route 50 is partially blocked at Washington Blvd due to high standing water, according to scanner reports.

Update at 6:10 p.m. — With heavy rain falling, the National Weather Service has issued a Flood Warning through 10 p.m. In addition to rain and wind, some readers have reported hail falling in parts of Arlington.

* AT 600 PM EST… DOPPLER RADAR INDICATED THUNDERSTORMS PRODUCING HEAVY RAIN LIKELY TO CAUSE URBAN FLOODING. UP TO ONE INCH OF RAIN IS OCCURRING IN A SHORT PERIOD OF TIME… WHICH WILL CAUSE FLOODING OF POOR DRAINAGE AREAS THAT COULD CAUSE BRIEF STANDING WATER. AREAS THAT RECEIVE REPEATED HEAVY RAINFALL COULD REQUIRE UPGRADE TO A FLASH FLOOD WARNING… SO REMAIN ALERT WHILE TRAVELING OR DELAY TRAVEL UNTIL THE HEAVY RAIN ENDS.

A FLOOD WARNING MEANS THAT FLOODING IS IMMINENT OR HAS BEEN REPORTED. STREAM RISES WILL BE SLOW AND FLASH FLOODING IS NOT EXPECTED. HOWEVER… ALL INTERESTED PARTIES SHOULD TAKE NECESSARY PRECAUTIONS IMMEDIATELY.

EXCESSIVE RUNOFF FROM HEAVY RAINFALL WILL CAUSE PONDING OF WATER IN URBAN AREAS… HIGHWAYS… STREETS AND UNDERPASSES AS WELL AS OTHER POOR DRAINAGE AREAS AND LOW LYING SPOTS. DO NOT ATTEMPT TO TRAVEL ACROSS FLOODED ROADS. FIND ALTERNATE ROUTES. IT TAKES ONLY A FEW INCHES OF SWIFTLY FLOWING WATER TO CARRY VEHICLES AWAY.

DO NOT UNDERESTIMATE THE POWER OF FLOOD WATERS. ONLY A FEW INCHES OF RAPIDLY FLOWING WATER CAN QUICKLY CARRY AWAY YOUR VEHICLE.

* AT 529 PM EST… DOPPLER RADAR INDICATED A LINE OF SEVERE THUNDERSTORMS CAPABLE OF PRODUCING DAMAGING WINDS IN EXCESS OF 60 MPH. THESE STORMS WERE LOCATED ALONG A LINE EXTENDING FROM BROADLANDS TO NEAR DALE CITY TO NEAR STAFFORD… AND MOVING NORTHEAST AT 55 MPH.

A TORNADO WATCH REMAINS IN EFFECT FOR THE AREA. ALTHOUGH A TORNADO IS NOT IMMEDIATELY LIKELY… IF ONE IS SPOTTED… ACT QUICKLY AND MOVE TO A PLACE OF SAFETY IN A STURDY STRUCTURE… SUCH AS A BASEMENT OR SMALL INTERIOR ROOM.

A TORNADO WATCH REMAINS IN EFFECT UNTIL 1100 PM EST FOR CENTRAL DISTRICT OF COLUMBIA… SOUTHERN MARYLAND AND NORTHERN VIRGINIA.

A LINE OF THUNDERSTORMS WITH SOME EMBEDDED TORNADOES IS HEADING TOWARDS THE WASHINGTON AND BALTIMORE METRO AREAS. THIS LINE WILL LIKELY CROSS THE METRO AREAS AT THE HEIGHT OF EVENING RUSH HOURS BETWEEN 5 AND 7 PM.

STAY ALERT FOR WARNINGS…AND BE PREPARED TO SEEK SHELTER QUICKLY IF YOUR LOCATION IS WARNED OR IF DANGEROUS WEATHER THREATENS.

IF YOU ARE CAUGHT OUTDOORS OR IN YOUR VEHICLE DURING A TORNADO… THERE IS NO SAFE PLACE TO BE. JUST GET AS LOW AS YOU CAN AND COVER YOUR HEAD TO PROTECT AS MUCH AS YOU CAN FROM DEBRIS. GET INDOORS IF AT ALL POSSIBLE.

THE SAFEST PLACE TO BE IN A TORNADO IS IN A STURDY HOME OR BUSINESS…ON THE LOWEST FLOOR…IN AN INTERIOR ROOM…AWAY FROM WINDOWS.”

Update at 3:30 p.m. — The National Weather Service has issued a Tornado Watch for Arlington and the surrounding region until 11 p.m. 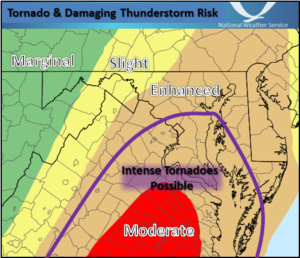 The National Weather Service says there’s an “enhanced” risk of damaging thunderstorms and even tornados in the D.C. area. A Tornado Watch may be issued for the region later this afternoon.

There is an enhanced risk for severe thunderstorms across the area. Main hazards are damaging winds and tornadoes late this afternoon through this evening. Monitor local news for additional weather information.