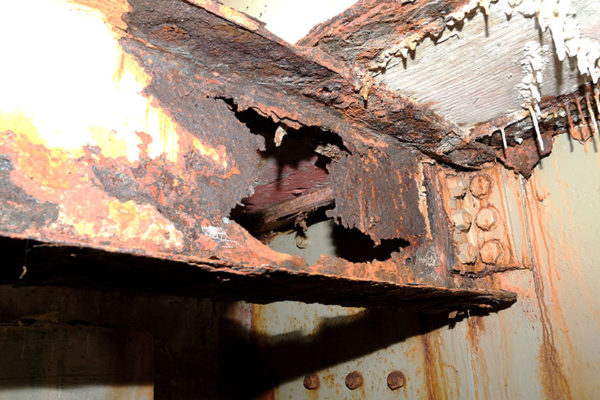 Word that the Memorial Bridge is deteriorating faster than expected and could close by 2021 without a complete overhaul has prompted a response from Northern Virginia’s congressional delegation.

Lawmakers issued the following joint press release today (Thursday), promising to work together to get the quarter-billion dollars in funding necessary to keep the bridge open.

The National Park Service (NPS) today announced that Arlington Memorial Bridge will need to close by 2021 absent funding for a full rehabilitation. The bridge has been undergoing emergency repairs since last year. Northern Virginia Reps. Don Beyer, Gerry Connolly, and Barbara Comstock, along with Senators Mark Warner and Tim Kaine, reacted to the news with urgent calls to fund repairs, estimated to cost as much as $280 million.

“Memorial Bridge was built to symbolize the coming together and reunification of a fractured nation following the Civil War. Today, unfortunately, it also symbolizes the neglect of our nation’s transportation system.” said Rep. Don Beyer. “The prospect of a shuttered Memorial Bridge is one we cannot live with. This challenge demands a solution and the regional delegation will work together to find it.”

NPS devotes much of its $20 million D.C. area transportation budget for repairs to the aging Memorial Bridge. This continued funding allotment severely hinders its efforts to sustain other regional transportation and infrastructure projects.

“To the tens of thousands of Virginians, D.C. residents and visitors who travel across the Potomac River every day, Arlington’s Memorial Bridge is a critical piece of our regional transportation system,” said Sen. Mark Warner. “The extended closure of this major commuter artery will be devastating to the economy and quality of life in the capital region. We will work together as a delegation to identify the necessary resources so the National Park Service can keep Memorial Bridge open.”

“Arlington Memorial Bridge is a key transportation link for thousands of daily Northern Virginia commuters as well as visitors to our nation’s capital,” said Sen. Tim Kaine. “It speaks to the state of our nation’s infrastructure that replacing this ‎National Park Service-owned bridge would cost as much as the entire yearly budget for Park Service bridges across the country. My colleagues and I in the National Capital Region’s congressional delegation took steps in last year’s transportation bill to make it easier to fund major projects like this. It is critical that we take the next step toward a new bridge before we reach the point at which it becomes unsafe to use the current one.”

Over 68,000 vehicles cross the bridge between Washington, D.C. and Arlington, VA every day. Closing the Memorial Bridge would cost local governments a projected $168,000 per day ($75 million per year) by 2021 in transportation outlays alone according to the Metropolitan Washington Council of Governments. Transit studies suggest that traffic from the bridge would spill over onto other area bridges, particularly the 14th Street Bridge and Roosevelt Bridge. The impact on an already-strained transportation system could likely produce new, extreme levels of gridlock in the nation’s capital and its Northern Virginia suburbs.

“The potential closure of Memorial Bridge, a major commuter route for many Northern Virginians, will have a profound negative effect on all our regional roadways,” said Rep. Gerry Connolly. “It is disheartening this announcement comes as we celebrate the National Park Centennial. I can think of no better way for Congress to celebrate the Park’s 100th birthday than to redouble its efforts to invest in our Park system. This is a federally-owned bridge, and thus a federal responsibility that Congress must address.”

“Arlington Memorial Bridge is a national treasure as well as a major thoroughfare for Northern Virginia commuters,” said Rep. Barbara Comstock. “It’s used every day by 68,000 vehicles as well as people coming and going to our airports, local landmarks, and work. We must ensure proper funding for the bridge so that this critical piece of infrastructure remains safe and usable. The alternative would cause serious traffic problems for my constituents and the region and harm the local and national economy.”