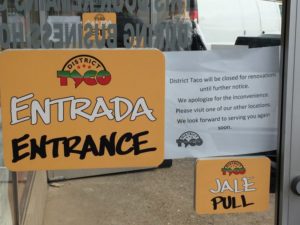 The very first brick-and-mortar restaurant opened by District Taco has closed for renovations.

Situated at 5723 Lee Highway, the restaurant first opened in 2010. Since then, District Taco has expanded with a slew of new locations in D.C. and Northern Virginia.

Osiris Hoil, who founded District Taco as a single taco cart and now serves as the chain’s CEO, said the Lee Highway restaurant is getting some needed TLC and will remain closed for a few weeks.

“We opened back in November 2010 with a low budget and since then we have improved the model with our new restaurants,” Hoil told ARLnow.com. “I believe in a system that our work environment need to be fun and clean so we can perform better in general.”

“The Arlington location, is getting the love that the other DT stores have and our longtime employees of that store will love getting a new restaurant with new equipment,” Hoil continued. “We should reopen in [a] couple weeks, we are working day and night so we can reopen and serve tacos to our amigos again!”

Arlington residents with a District Taco craving can head to the company’s new location in Rosslyn, which has been doing brisk weekday lunchtime business since it opened.