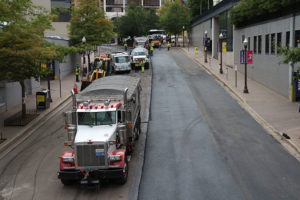 Updated on 3/16/16 — The Trades Center parking garage addition was approved unanimously by the County Board at its Tuesday meeting after a brief discussion.

Earlier: The Arlington County Board approved  two multi-million dollar contracts at its meeting on Saturday.

First, the Board was to consider a $4.85 million contract, with a $0.73 million contingency, to add a third level to the existing two-level parking garage at the Arlington Trades Center near Shirlington.

The Trades Center houses much of Arlington’s maintenance and vehicle fleet operations. According to a staff report, employment at the center has increased to 288 from 174 in 2010. The new garage level would add 155 parking spaces and will follow the increasingly in-vogue “build up, not out” philosophy.

Correction from earlier report: This contract was pulled from the Board’s consent agenda and will be considered at its Tuesday meeting.

Also on Saturday, however, the Board did approve two road paving contracts, together worth nearly $12 million. From a county press release:

“Road maintenance may not be exciting, but it affects everyone in the County,” said Arlington County Board Chair Libby Garvey. “The County is committed to investing in our roads — so that all drivers, walkers and cyclists can travel safely and comfortably.”

The Board voted 5-0 (part of Consent Agenda) to approve the asphalt contracts totaling just under $11.6 million to Finley Asphalt & Sealing and Fort Myer Construction Corporation.

It takes constant effort to maintain Arlington’s 974 lane miles of streets. Each year, the County identifies streets for paving based on pavement conditions, traffic volumes and planned construction by either the County or private developer. Since 2013, the County has averaged the paving of 75 lane miles per year.

Funding for the contracts comes from bonds approved by voters in 2014 and current year Pay-As-You-Go (PAYG), and was included in the Fiscal Year (FY) 2015 – FY 2024 Capital Improvement Plan.