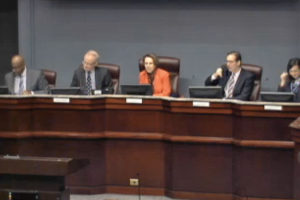 A slight tax rate cut and more money for schools and public safety were the three big items of note during last night’s county budget approval.

The Board largely took the recommendations of County Manager Mark Schwartz, who presented his proposed budget in February, and voted unanimously for the new, $1.2 billion FY 2017 budget.

Under the budget, the property tax rate will be reduced by half a cent, to $0.991 for every $100 in assessed value, while the overall property tax burden on the average homeowner will increase from $7,640 to $7,829. The increase is due to a 2.8 percent rise in residential property assessments.

The budget provides more money for Arlington Public Schools than APS asked for, in stark contrast to the budget battle in Fairfax County.

APS, which is continuing to grapple with a burgeoning student population, will get a $466.9 million budget transfer from the county, a 3.3 percent increase over the previous fiscal year. That includes “$1.1 million in one-time and ongoing funding above the School Board’s funding request.”

The police department will get six new officers to help the department “meet its core mission responsibilities.” The Sheriff’s Office, which is facing a lawsuit over the alleged mistreatment of a deaf jail inmate, is getting five new positions to “improve safety and security at the Courthouse and the Detention Center, bolster its administrative staff and add a uniformed American with Disabilities Act coordinator.”

Other notable budget items include:

“This is a good budget,” Arlington County Board Chair Libby Garvey said in a statement. “Even as our population and school enrollment continue to grow, and our office vacancy rate remains high, the Board was able to put together a budget that preserves our community’s values, gives schools more funding than they requested, and adds funding for public safety, economic development and other key services – with a slight decrease in the tax rate.”

The budget is a complex document and the adopted budget is not yet online. Know of any other notable budget items not included here? Any quiet boosts or cuts in funding to a certain group or county department? Let us know in the comments.