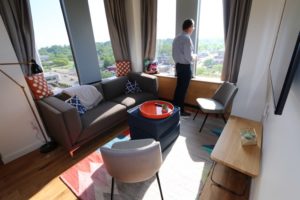 You read about the new WeLive facility in Crystal City here last week.

Next week, you can hear about it and see it for yourself.

ARLnow is holding an after-work event on Tuesday, May 17 called WeWork, WeLive and the Future of City Living. It’s taking place from 6-8 p.m. at WeWork (2221 S. Clark Street).

After some networking and refreshments, Sarah Fraser will host a discussion with Dave McLaughlin, WeWork’s General Manager for the Eastern U.S. and Canada. We’ll talk about the technology, design and the planning behind WeLive, and why it might be a future model for urban residential.

Space is limited. Tickets are available via Eventbrite.