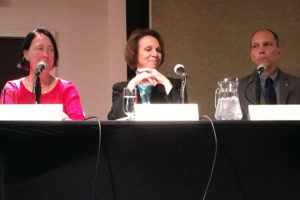 The three candidates for Arlington County Board debated business and other public policy issues Monday, at a forum sponsored by the Arlington Chamber of Commerce.

Both Democratic contenders — incumbent County Board Chair Libby Garvey and challenger Erik Gutshall — vowed to make it easier for companies to do business in Arlington, for companies large and small.

Early on, Garvey pointed to the difficulty Boeing encountered in trying to build its D.C. area headquarters in Arlington as an example of something that shouldn’t happen again.

“Boeing had planned to build a second building but found the process here so unpleasant that they said they’d never build another building in Arlington,” said Garvey.

Gutshall, who is the owner of a small business, Clarendon Home Services, focused on customer service as the key to improving the experience of operating a business in Arlington.

“I firmly believe that Arlington County needs leadership that will accept nothing less than a culture of get to yes,” said Gutshall. “Too many citizens and business owners continue to have frustrating horror stories of the lack of transparency, accountability and helpfulness of our county. I know because I have more than a few of my own.”

“Transit is largely regional and we really need to make it easy with a single seat ride for folks from Fairfax to Loudon to Prince William to get into Arlington and D.C. This is how we will get more cars off the roads,” said Garvey.

A common theme raised by Gutshall was the need to make infrastructure investments.

“For the sake of our economy and quality of life, we must be forceful advocates for a second river crossing for Metro,” he proposed. Gutshall and Garvey both spoke about transit on Columbia Pike; Gutshall has been critical of Garvey and the county’s lack of action following the cancellation of the Columbia Pike and Crystal City streetcar project.

“I’ll also work to ensure that bus routes on Columbia Pike contribute to the achievement of our main street vision by providing providing frequent 6-10 minute service, 18 hours a day that connects our diverse residents and businesses efficiently to the places they want and need to go — beyond work including more north to south connections in the county.”

Said Garvey: “I am pleased with the proposal to expand the transit way from Crystal City to Columbia Pike essentially running the same route as had been planned for the streetcar and we will have a one seat ride the west end of Columbia Pike all the way west through Crystal City.”

Also discussed was the proposed gondola connecting Rosslyn with Georgetown. Garvey has expressed skepticism about the gondola, while voting to approve funds for a feasibility study. Gutshall said he supported the study.

“I think that the gondola study is worthwhile,” said Gutshall. “I have my reservations and doubts seriously that it will come to fruition… It seems that it was a relatively modest sum for Arlington to kick in a little bit of funds just to see if it has legs and if it might go somewhere. But I will be very honest. I don’t think in the long run its going to have legs.”

When asked about their top five priorities for capital spending, all three candidates placed education and schools on the forefront. (See the full list, below.)

The candidates also focused on parks, recreation and open space.

“In a small county with a growing population, we need to preserve as much green space as possible so that Arlingtonians have space for recreation and to enjoy nature,” said Garvey.

“It’s a step in the wrong direction, away from collaboration and likely only to foster more divisions in the county,” said Gutshall. “The Blue Ribbon Panel pushes aside key recommendations from the 250+ citizens who gave us a sound blueprint from moving forward collaboratively. Concentrating the power to eliminate county policies and objective developed over many years in the hands of a few unelected advisors inevitably will lead to a continued erosion of trust.”

“I agree that the Blue Ribbon Panel was our biggest mistake but not at all for the same reasons,” Garvey said of the panel, which she proposed. “Our biggest mistake was thinking that it would be a concept easily understood by the community.”

On the other hand, Clement said that the biggest mistake was the impending demolition of the Wilson School in Rosslyn, to make way for a new home for the H-B Woodlawn Secondary Program, which she linked to a mixed-use development plan for the area, at a time of high office vacancy rates.

“This was not only a blow to historic preservation but it wasn’t even a good economic decision given that new mixed-use development in Rosslyn is going wanting,” said Clement.

Their choice of the biggest success was more varied, with Clement considering it to be the plan to toll I-66 inside the Beltway. Gutshall’s selection was the passage of the new county budget, which funded community needs while slightly reducing the tax rate. Garvey’s choice was the discussion of a new driveway, to be built as part of the Stratford Middle School project.

“As simple as this issue may sound, there were a number of factors to consider: Safety, environmental, historical, and there were a lot of passionate views,” said Garvey of the driveway discussion. “I’m proud of how we conducted the session, in the open with all the voices heard and considered with the board members using the facts presented to make up their minds, doing it before the schools embark on the expensive time consuming process.”

The event was moderated by ARLnow.com editor Scott Brodbeck.

The candidates’ respective top five capital spending priorities are below.