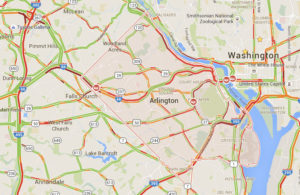 Today is the first weekday of Metro’s SafeTrack maintenance surge.

Via Twitter there are reports of crowded trains and long waits at stations, although Metro says early indications were that everything was going according to plan. Via Google Maps, traffic appears to be heavier than usual, with lots of red on the traffic map.

Whether you commute via Metro, car or otherwise, we want to know: was your commute slower than usual today?