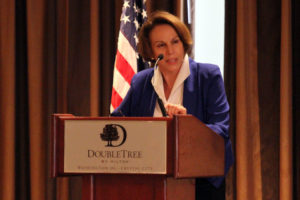 Arlington County Board Chair Libby Garvey addressed transportation and affordable housing on Columbia Pike at her State of the County address Tuesday morning.

Garvey said the county needs to “fix the transportation” on the Pike, “not that it’s too bad now.” She referenced the Transit Development Plan for enhanced bus service on Columbia Pike, which the Board is expected to consider at its July meeting.

Garvey noted that there has been continued development along the Columbia Pike corridor. The cancellation of the streetcar project — Garvey led the charge against it — “hasn’t affected people as much as some would suggest,” she said.

“It’s great what we’re doing, but I think we have to be aware that you don’t want to concentrate it too much,” she said.

That should be welcome news to the Coalition of Arlingtonians for Responsible Development (CARD), a particularly vocal civic group formed last year in opposition to what it views as a clustering of affordable housing on Columbia Pike. The group says it favors a more even geographic distribution of affordable housing throughout Arlington.