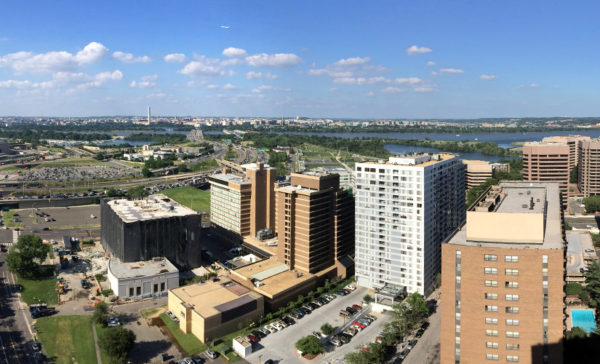 Police Conduct Pedestrian Safety Detail — Arlington County Police conducted a pedestrian safety detail at the intersection of Washington Blvd and N. Utah Street, in Ballston, where a teen was struck by a car and seriously injured in April. In a tweet, a driver is shown receiving a ticket for failure to yield to a pedestrian. [Twitter]

Pure Barre Coming to Pentagon City? — Exercise studio Pure Barre is finalizing a lease on the ground floor of the new Bartlett apartment building in Pentagon City. That was revealed during an opening party for the Bartlett on the building’s rooftop (see photo, above) Wednesday night.

Photo Shows Big Changes in Pentagon City — As seen in an old black-and-white photo, 56 years ago Pentagon City was mostly empty fields on the outskirts of Crystal City and the Aurora Highlands neighborhood. Development has transformed it into a Metro-accessible hub for shopping, apartment living and offices. [Twitter]

Light Pole Snaps During Storm — Earlier this week, a light pole in the park along Lubber Run snapped during a storm. [Twitter]