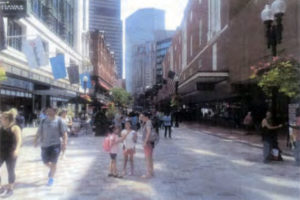 The Arlington County Board is expected to take up a change to the county’s Master Transportation Plan (MTP) that would allow pedestrian-only streets.

The Board is set to consider a request to advertise hearings on the change at a meeting later this month, according to a draft proposal.

The proposal would add “Pedestrian Street” to the MTP’s existing four defined street types. A pedestrian street is described as “a car-free travel corridor that provides public pedestrian access to adjacent buildings and properties fronting the street and serves as a public meeting place and location for commerce, communication and other community activities.”

“A pedestrian street is [predominantly] paved with a hard surface suitable for walking and includes physical measures that prevent regular access by motor vehicles,” the proposal says.

There are currently no pedestrian-only streets in Arlington, but a few are proposed, including a new 18th Street corridor in Rosslyn that would replace the neighborhood’s aging skywalk system with a several blocks of a new pedestrian-only street between N. Oak Street and N. Lynn Street, with the Rosslyn Metro station in between.

In addition to pedestrian-only streets, the proposal updates the definition of an existing street type — a pedestrian and bicycle priority street. The newly-defined “shared streets” are intended to “allow people to comfortably walk within the roadway” thanks to “implicitly slow traffic speeds through the mixing of travel paths, physical measures and visual cues.”

A recently-approved plan for the Courthouse neighborhood calls for portions of 14th and 15th streets to be shared streets, primarily intended for pedestrians but open to slow-speed vehicular traffic.

If the request to advertise the changes is approved in September, the Planning Commission and the County Board are likely to hold hearing on the change in October.