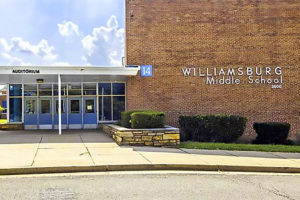 (Updated at 8:50 a.m.) In 2012 Arlington Public Schools considered, and then scrapped, a proposal to move middle schools to block scheduling. Four years later, the issue is coming up again at Williamsburg Middle School.

In response to an inquiry from ARLnow.com, prompted by emails to us from parents, Williamsburg principal Gordon Laurie confirmed that block scheduling is under consideration. School staff will be presenting a proposal to parents at a meeting in two weeks, he said.

Here’s a statement from Laurie:

We have been considering the block schedule as a staff since January 2016 to provide for an Arlington Tiered System of Supports (ATSS) period in the day as a way to meet the needs of all students’ academic, behavioral, and emotional needs.  Our goal with considering block scheduling is to make sure that we can provide individualized supports and to provided individualized learning to our students.

We convened a faculty committee to examine the block schedule and how it might benefit all students and Williamsburg. We also invited APS teachers from schools that use the block schedule system to visit with their teacher peers and talk to them in their content areas about their experience. We shared the process with the Williamsburg community last February to gather their feedback.

As the process evolved, it became clear that we were too far along in our school year to undertake and implement a new bell schedule for this school year (2016-17). Williamsburg staff began discussing block scheduling again this year as a way to provide additional supports to students. Staff has put together a proposal to share with Williamsburg families at a meeting on Wednesday, November 9 at 7 p.m. During that meeting, we will seek input, provide clarity and answer questions. No final decisions have been made at this point.

Parents who contacted ARLnow.com about the block scheduling said they had been kept in the dark about it and only found out when word leaked out following a school staff meeting yesterday.

Block scheduling has been in place at Arlington’s high schools for at least a few years. It is in place at Kenmore Middle School but not at other local middle schools, an Arlington Public Schools spokesman said.